Bringing Power to the People—by Plugging Into the Sahara

"Where there are few people, there is lots of renewable energy," says one clean-energy engineer. 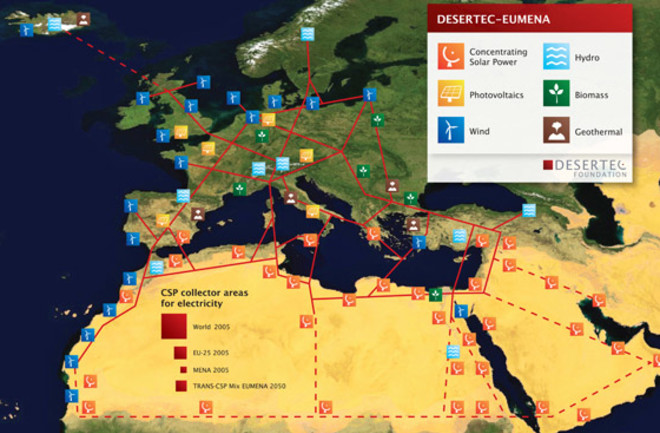 Proposed grid for a sustainable supply of power to Europe, the Middle East, and North Africa (EU-MENA) | Image courtesy of <a class="external-link" href="http://www.desertec.org/">DESERTEC Foundation</a>

What if 35,000 square miles of barren desert could meet the entire planet's energy needs? That is the provocative premise that launched Europe's DESERTEC, a plan to erect vast fields of solar thermal collectors in North Africa, the Middle East, and southern Europe. The collectors would heat water to produce steam to drive electricity-generating turbines. The scientists and engineers behind the project hope that DESERTEC will be able to supply 15 to 20 percent of Europe's electricity by the middle of the century.

The DESERTEC group seeks to bust the logistical barriers to green energy by generating solar and wind power in the warm, arid locations where it is most abundant and transferring it to dense population centers farther north. "Where there are few people, there is lots of renewable energy," says Franz Trieb, a German engineer who conducted initial studies to explore the plan's potential. DESERTEC would place dozens of concentrated solar thermal power plants in uninhabited areas as well as wind turbines in coastal locations and scattered photovoltaic installations throughout Europe. Photovoltaic and wind power are intermittent by nature, Trieb notes, but solar thermal can produce consistent power because accumulated solar energy—stored as heat in large tanks of molten salts—can be used to run power plants at any time of day. "You can control the capacity like in a coal plant, but using solar energy instead of coal," Trieb says.

Representatives of the Moroccan and Egyptian governments have publicly expressed support for the DESERTEC concept, but powering all of Europe with an off-site, solarcentric mix of alternative energy sources remains an extremely tall order. Although solar thermal collectors are better than photovoltaic panels or wind turbines at generating reliable power around the clock, solar thermal power is also expensive; at present energy costs, it would require government subsidies to compete with coal and natural gas, which can generate electricity much more cheaply.

Then there is the sheer magnitude of the proposed project. "There are always going to be scaling issues when you're talking about this much deployment of any technology," says Joseph Romm, a physicist and climate expert at the Center for American Progress. Large numbers of new transmission lines in politically unstable areas would have to be built to handle the massive power load, and the desert-generated power would have to travel thousands of miles to its destination, adding to its final cost.

The dire need for large-scale clean energy may motivate planners to solve these problems. Solar thermal plants that will produce a total of 500 megawatts are now under construction in Ouarzazate, Morocco. "Pursuing some proof of concept is worth doing, because we are going to need a staggering amount of low-carbon energy," Romm says. "We're ultimately going to have to build solar power in every desert."