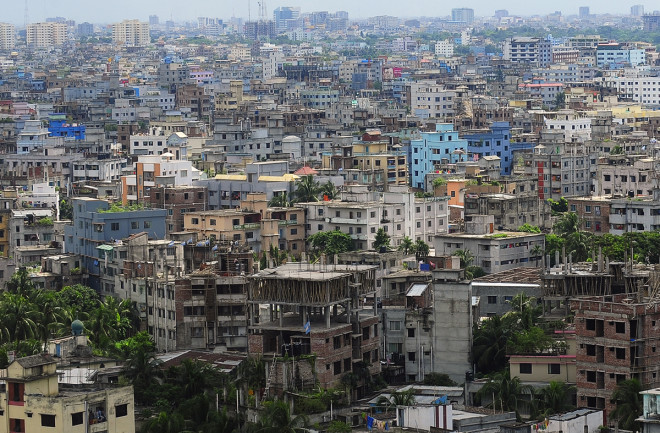 Bangladeshi cities, including the capital city of Dhaka, have lax building codes, making them vulnerable to a temblor. | MUNIR UZ ZAMAN/AFP/Getty Images

“Don’t panic,” says geophysicist Michael Steckler when asked about his team’s startling discovery: a unique and potentially catastrophic earthquake risk for Bangladesh, one of the world’s poorest and most densely populated countries.

For more than a decade, Steckler and colleagues have collected data from instruments positioned along a known fault line stretching from Myanmar (also known as Burma) to eastern India. Researchers had long believed the fault was of the strike-slip variety — tectonic plates on either side were moving horizontally past each other in the continents’ slow dance across Earth’s surface.

But in July, the team announced that the Indo-Burman fault beneath Bangladesh is actually a subduction zone: One plate is shoving another underneath it. It’s the first time this tectonic process has been discovered beneath land; all other known subduction zones occur underwater where oceanic crusts meet. The most powerful and devastating earthquakes are along these zones, including Japan’s 2011 Tohoku quake, a magnitude 9.0 on the Richter scale.

The new research, published in Nature Geoscience, shows that pressure is building along the zone beneath Bangladesh. Although the study did not address when the quake might occur, it’s possible it could register a magnitude of 8.2 or higher.

Dhaka is already prone to flooding. In May, commerce in the city nearly halted due to rains from a cyclone. | Mamunur Rashid/NurPhoto/Getty Images

The big question is how much damage a quake of that size could do to Bangladesh, which sits atop a layer of sediment about 12 miles thick. Sediment can liquefy during significant seismic events, and few buildings in the crowded country meet even minimal safety codes.

Researchers are preparing to gather more information about what’s going on deep below the sediment, where the subduction is occurring. Meanwhile, Steckler, based at Columbia University’s Lamont-Doherty Earth Observatory, recommends that the region prepare for the Big One with safer construction and updated disaster planning.