Baked America: Do You Prefer Your Country Rare, or Well Done? 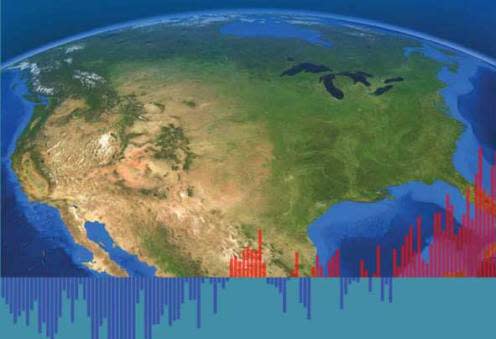 My latest Science Progress column is about the new administration's first global warming report--an eight year successor to the original Clinton era "National Assessment" of climate change impacts on the United States. Why the eight year gap--which happens to be illegal as these reports are required, by law, every four years? The reason is (you guessed it) the Bush administration:

Having inherited the Clinton-era report (the so-called “National Assessment”), the Bush administration promptly went about undermining and censoring it, refusing even to reference or cite it in government documents or deliberations. And rather than produce a new and updated study when the time came—they are required every four years under the 1990 U.S. Global Change Research Act—the last administration instead sought to run out the clock. Instead of producing a single, nationally relevant, and publicly oriented study, it began a series of 21 planned “synthesis reports,” treating various aspects of the vast climate problem in technocratic isolation.

But now the darkness has lifted and we now have a government that actually wants to use climate science in service of its people. To that end, the new report lays before us a choice--just how well cooked do we want America to be?

For those familiar with climate science, the latest findings aren’t much of a shock: Since global warming is already happening everywhere, it is of course already afflicting the United States. We’re seeing rising seas, glacial retreats, more incidents of extreme precipitation, and much else. We have every reason to expect that these regionally variable changes will steadily worsen, with resulting severe threats to coastal communities, water supplies, agriculture, human health, and more. Yet we can still control how bad it gets, and how we respond. That’s a key message of the Obama report: Cutting emissions now will surely ease the changes we see later. This, in turn, means that so-called “mitigation” and “adaptation” measures shouldn’t be thought of as contradictory; rather, they’re complementary. The new Obama climate report suggests both that strong action can save us from the worst outcomes, but also that we have to prepare for changes already upon us—changes that can no longer be avoided.

I close by arguing that the political potential of this report is quite considerable, especially in light of the pending Waxman-Markey vote. The new study does nothing less than give every senator, every congressman, a way to connect global warming directly to concerns in his or her state--concerns affecting his or her constituents.

For unlike a report from the United Nations’ Intergovernmental Panel on Climate Change, a regionally specific U.S. climate change impacts study like the one just released isn’t just about the science. It’s about whether the family business will still be viable thirty years from now, and whether the family home will have to be relocated. For this reason, it has the potential to reach and motivate the American public around climate change in an unprecedented way.

You can read the full Science Progress column here.