Why does Earth have so much water compared with the other planets? 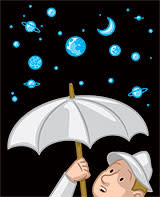 Michael Drake, director of the University of Arizona’s Lunar and Planetary Laboratory in Tucson, answers:

Not only does Earth have a lot of visible water—oceans cover 70 percent of the surface—but another 10 oceans’ worth of water may be entombed deep inside. How the water got here is a matter of debate. Some researchers posited that comets or asteroids brought it to an initially dry Earth. This explanation has been largely ruled out, since the geochemical signature of Earth’s water doesn’t match those of comets and asteroids.

More likely, our planet is wet simply because it formed from water-covered materials. Computer simulations suggest that when Earth began forming from dust particles 4.5 billion years ago, it was surrounded by clouds of hydrogen and oxygen that would have reacted together and deposited layers of water onto the particles’ surface. As bits of dust coalesced into the early Earth, the water was trapped and eventually became incorporated into the planet’s rocky innards. Some of that water eventually reached the surface through volcanoes. Earth is not the only world that formed wet. Venus apparently had water and lost it. Mars may still have more water than Earth, locked up in its permafrost and ice caps. The giant planets and their satellites also have lots of water. In the giant planets, it is in vapor form; the interiors of their moons may consist largely of water ice.