After tying for second lowest extent in September, Arctic sea ice began expanding rapidly. But that has turned around dramatically in October.

An animation of satellite images shows differences in sea ice in the Beaufort Sea off Alaska's coast between Oct. 14, 2014 and Oct. 12, 2016. The first image, captured by the Terra satellite in 2014, shows extensive snow cover around Alaska's Brooks Range (to the left), and sea ice forming offshore. The second image, from the Aqua satellite in 2016, shows the same region — mostly snow- and ice-free. (Images: NASA Worldview. Animation: Tom Yulsman) Arctic sea ice has been been growing much more slowly than average during October. Its geographic extent is now in a rough tie with 2007 and 2012 for the lowest in the satellite record for this point in the year. 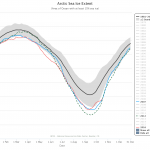 Source: NSIDC The chart at right compares the evolution of Arctic sea ice extent during 2007, 2012 and 2016. This year is plotted in red. Note how slow the growth of ice has been during October. (Please click on the thumbnail to enlarge it.) Also check out just how low Arctic sea ice extent went during September, at the end of the warm season. In fact, 2016 tied with 2007 for the second-lowest extent in the satellite record. But after that, freeze-up actually occurred fairly rapidly — until slowing dramatically at the beginning of October. What's up with this Arctic sea ice roller coaster ride? According to Ted Scambos, a senior research scientist at the National Snow and Ice Data Center, two big Arctic storms in August contributed significantly to the very low minimum extent in September. They probably did this by "breaking up the ice and stirring a trace of warmth up from deeper levels (5-10 meters below the surface)," Scambos says. Not too long after the storminess subsided, the surface water refroze fairly quickly, accounting for the rapid expansion of sea ice after the low point in September. 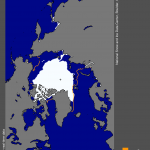 Source: NSIDC That rapid freeze-up happened in the heart of the Arctic Ocean, where temperatures would normally be coldest. Meanwhile, more at the periphery — particularly in the Barents, Kara and Laptev seas — "the ice edge has barely changed," says Julienne Stroeve, who also serves as a senior research scientist at NSIDC. Sea ice has expanded somewhat in the Beaufort Sea, off Alaska's north coast. But the edge is still far short of the long term average in the region. (Click on the thumbnail at left for a map of Arctic sea ice extent as of Oct. 17, 2016.) I created the animation of satellite images at the top of this post to compare conditions in the Beaufort Sea between mid-October of 2014, when sea ice extent was closer to normal (but still low), and this year. You can tell which image was captured in 2014 because of all the snow cover in and around Alaska's Brooks Range, and the ice that's forming at sea. I find the comparison with this year to be quite stark. Why has Arctic sea ice been growing so slowly in the past couple of weeks? Once again, Scambos says warm ocean temperatures are probably implicated. And it looks like that relatively warm sea surface may be having an effect on the air temperature above it:

The yellows and reds in the map above show just how anomalously warm the air has been at about 300 feet above the surface. (The North Pole is at the center of the plot.) Scambos thinks the warm sea surface temperatures that have been retarding ice growth also have been warming the air directly above the water.

"It is not surprising that it is extremely warm in the weeks following near-record minimums [in sea ice extent], because open water beneath the atmosphere buffers the air temperature at near the freezing point for several weeks until several centimeters of ice are formed," Scambos says. "In this case, I would say that the high air temperature anomaly is an effect, not a cause, of slow sea ice growth, and that the leading cause is ocean temperature."

Why are ocean temperatures so warm? When sea ice shrinks in extent, more solar energy is absorbed by dark surface waters. And this has been happening more and more in the Arctic during recent years.

In fact, the Arctic overall has been warming faster than any other region on Earth, thanks to emissions of greenhouse gases into the atmosphere. And sea ice has responded over the long term by declining in both geographic extent and volume. 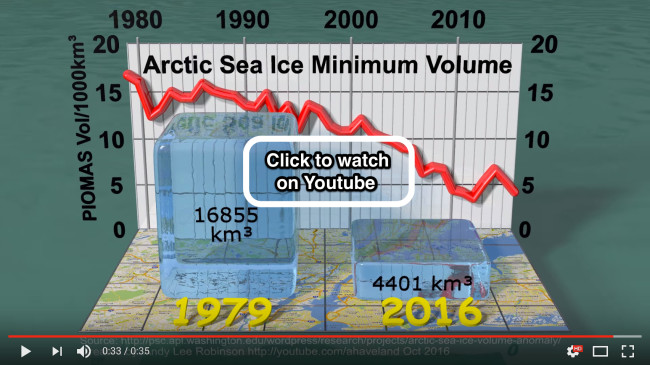 Screenshot from an animated visualization by Andy Lee Robinson of the decline of Arctic Sea Ice, showing the minimum volume reached every September since 1979. The map of New York provides a sense of scale. Click to watch the visualization on Youtube. (Video: Andy Lee Robinson) The visualization linked to the screenshot above shows just how dramatic the downward trend in Arctic sea ice volume has been since 1979. I find it pretty unsettling. Lastly, it's important to realize that two weeks is a short period of time, and Arctic sea ice could start forming up at a more normal rate for this time of year. In fact, that's what Scambos predicts: "Now I expect that sea ice growth will take a more typical path (typical for the past 5-8 years, at least)."