The annual report was prepared by 69 researchers in eight countries, and was issued by the U.S. National Oceanic and Atmospheric Administration. What goes on in the Arctic doesn't stay in the Arctic. The researchers note that conditions in the Arctic can affect global weather, and point to the huge snowstorms that hit the American northeast and mid-Atlantic states last winter as an example. 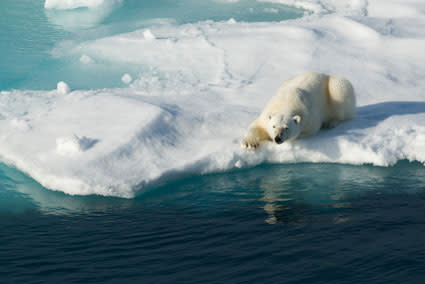 "Return to previous Arctic conditions is unlikely." That's the understated conclusion from this year's Arctic Report Card, which found that air temperatures will continue rising and ice will continue melting in the Arctic as global warming continues to take its toll on the region.

"Normally the cold air is bottled up in the Arctic," said Jim Overland of the National Oceanic and Atmospheric Administration's Pacific Marine Environmental Laboratory in Seattle. But last December and February, winds that normally blow west to east across the Arctic were instead bringing the colder air south to the Mid-Atlantic, he said. "As we lose more sea ice it's a paradox that warming in the atmosphere can create more of these winter storms," Overland said at a news briefing. [Washington Post]

The Arctic is feeling the effects of climate change faster than the rest of the globe due to a feedback cycle called polar amplification.

Warming air melts the sun-reflecting white snow and ice of the Arctic, revealing darker, heat-absorbing water or land, spurring the effects of warming. This is further amplified by the action of the round-the-clock sunlight of Arctic summers. [Reuters]

Other findings from the report: Sea ice has declined sharply over the past three decades and hit record lows in the last four years, glaciers are losing mass, and permafrost temperatures are increasing. These rapid changes are forcing Arctic animals to adapt or die; the report notes that some species of seabirds and whales seem to be prospering in a warmer world, but many more species are in decline. Here's a video NOAA put together to sum up its findings: Related Content: 80beats: 2010’s Hot Summer Took a Toll on Arctic Ice, Walruses, and Coral

Planet EarthA Year in the Arctic: A Close-Up Look at the Biggest Ever Polar Expedition

The SciencesAre Strange Space Signals in Antarctica Evidence of a Parallel Universe?