Antarctica's Aging McMurdo Station is Getting a Major Overhaul 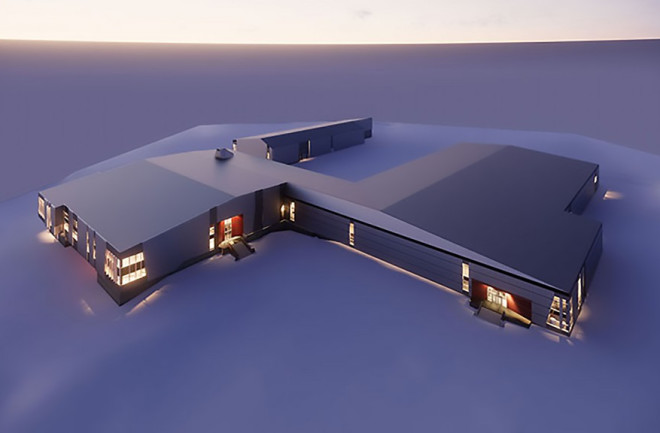 Antarctica's McMurdo Station is currently something of a small town, home to a sprawling complex of buildings. In the coming years, those old buildings will be demolished and built section by section into one new, massive facility, rendered here. (Credit: National Science Foundation) After more than 60 years, McMurdo Station, Antarctica’s main research center, is set to begin its first major infrastructure update. In February, the National Science Foundation got the green light to start construction on the so-called Antarctica Infrastructure Modernization for Science, or AIMS, project. As first reported by Antarctic Sun, the continent's NSF-funded newspaper, the project will consolidate the sprawling research station’s some 100 buildings into just six primary structures while increasing safety and improving energy efficiency. The goal of the 10-year project is to ensure long-term sustainability of the U.S. Antarctic Program’s ongoing research efforts. “Through AIMS, this historic site for scientific research will gain the capabilities that will allow it to continue in its role as a leading outpost for scientific endeavors,” Kelly Falkner, Director of NSF’s Office of Polar Programs, said in a statement.

Established in 1956, McMurdo Station was built without a master plan. Instead, the logistics hub grew haphazardly as Antarctic research blossomed and funding allowed. The station now resembles a small town complete with a fire station, infirmary, dormitories, clubs and a power plant. Its buildings sprawl across more than 160 acres of the icy continent. Some buildings are original to the founding of the base. Many are old and in need of repair. Even the newer Crary Science and Engineering Center is more than 20 years old. The station’s expanse and age means wasted resources and safety concerns. The station’s infrastructure is literally falling apart and safety risks abound. According to an independent report that originally recommended the research station’s overhaul in 2011, forklifts are known to fall through a warehouse floor, kitchens lack grease traps and snow blows into buildings through sizeable gaps under the doors. Storage for equipment and supplies is as haphazard as the layout of buildings across the station. Supplies are either buried under snow outside or spread across 20 building throughout the campus.

Everything from food services to a fire department and recreational space will be built into the new Core Facility. (Credit: National Science Foundation)

A primary goal of the AIMS project is create safer and more efficient working conditions. Many of the old buildings will be torn down and the new buildings will each have a designated purpose. According to the Antarctic Sun, new construction will begin with the Vehicle Equipment Operations Center, followed by the largest update to the station, the Core Facility. The facility will encompass 261,000 square feet and house station management, administration, food services and dining, the fire department, medical services and recreational space. The station’s carpentry, electrical, and metalwork shops will also find a home in the Core Facility. The plan is to build the structure in sections over multiple years. The Field Science Support Center, which will store field gear and communications equipment, is last on the docket for construction. The new structures, which will feature architecture designed to reduce snow drifting, will also be more energy efficient, specifically aiming to reduce energy demands for heating, lighting and water production. Supplies will arrive to the continent in January 2021 with construction set to begin the following October with a plan to keep research on track and moving forward.