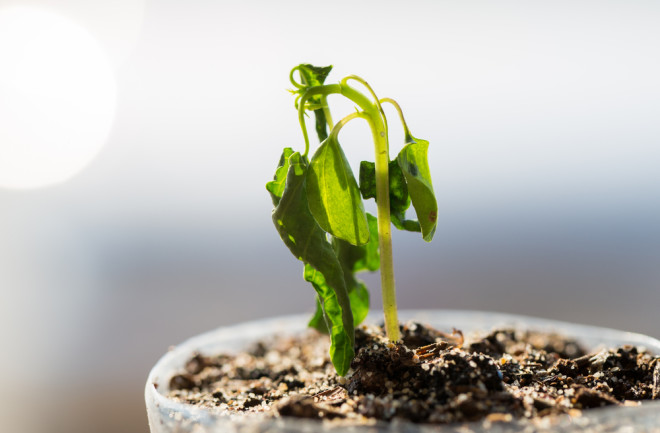 Water shortage troubles are common in the arid West and South Africa. But they’re not the only places enduring dry spells. In a new study today, scientists say the atmosphere itself is suffering from a major drought. The lack of moisture in the air is sucking water from dirt and plants, leading to reduced crop yields and impaired plant growth worldwide, and likely adding to global warming.

“It’s like there is a pump in the air, and the pump extracts the water from the soil and plants,” Wenping Yuan, an ecologist at Sun Yat-Sen University in Zhuhai, China, who led the new research, said in an email.

Two years ago, Yuan and colleagues realized that since the late 1990s, the growth of vegetation across the globe has slowed down. They ruled out factors like temperature and precipitation as the root of the problem, but were left scratching their heads until last year when a link between global warming and water in the atmosphere inspired an idea.

As air temperatures increase, the amount of water the atmosphere can possibly take up – and hold onto – also increases. The only problem is the actual amount of water in the atmosphere has gone down, not up. The researchers say it’s likely due in part to reduced evaporation from the oceans, though other factors could be at play as well.

The deficit between how much moisture the air can hold and how much it actually has creates something like a pump, drawing water from the land to fill the atmosphere. Yuan and team thought this deficit might explain the decreased vegetation growth.

The researchers analyzed four climate datasets to assess the atmospheric water deficit over the last 150 years. They found the number has multiplied by as much as 17 times since the 1990s, the team reports Wednesday in the journal Science Advances.

“Definitely, these changes will impact the vegetation growth,” Yuan said. Indeed, when the scientists assessed global vegetation growth from satellite data, they found vegetation cover began decreasing in the late 1990s, right as the atmospheric water deficit began to increase.

The scientists then used machine learning and ecosystem models to reconstruct global vegetation patterns based on atmospheric CO2, air temperatures, precipitation, radiation, wind speed and the atmospheric water deficit. The models revealed the increasing water deficit is the main cause for decreased vegetation growth since the 1990s.

More slowly growing plant life across the globe could reduce crop yields and forestry-related resources, Yuan says. It’ll also exacerbate global warming. As plants try to hold onto water, they close up pores on their leaves. The defense mechanism means the plants don’t lose as much water to the atmosphere, but they also don’t take up as much CO2. The result is decreased plant growth and increased CO2 in the atmosphere, “which will result in [a] stronger greenhouse gas effect,” Yuan said.