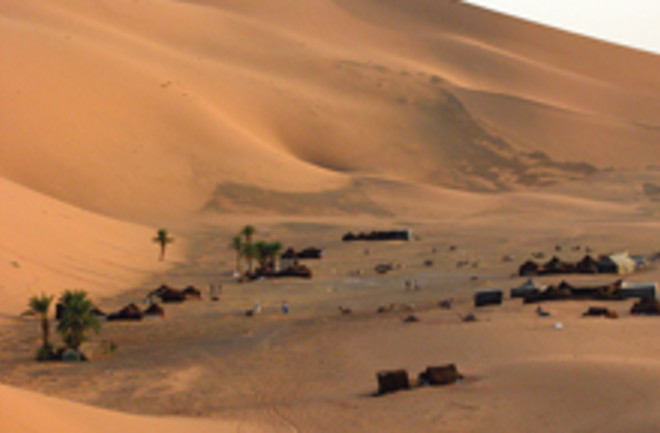 The Sahara is the world largest desert, and getting larger. It threatens to creep ever further to the south and turn arable land in desert wasteland. The nations in its path have an idea, though: We'll build a fence. Of trees. The "Great Green Wall" would be a tree band that spans the breadth of northern Africa, 9 miles wide and nearly 5,000 miles long, from Senegal at the western edge near the Atlantic to Djibouti on the eastern edge near the pirate-infested Gulf of Aden. It may sound too dreamy or crazy to ever go forward, but this week at a meeting in Chad about desertification, the Global Environment Facility backed the belt idea with $119 million. Chad's minister of environment, Hassan Térap, says it can be achieved:

When asked if the long-discussed but yet-to-be funded Green Wall initiative was too ambitious, Térap told IRIN: “We have to attack the problem, long ignored, through vision, ambition – and trees. What is wrong with ambition?” [IRIN Africa].

To bridge the east-west expanse of Africa, the wall would pass through Burkina Faso, Chad, Djibouti, Eritrea, Ethiopia, Mali, Mauritania, Niger, Nigeria, Senegal and Sudan. But while those nations have discussed such a huge project before

, little has been done. Now, though, with the $119 million divided between the constituent countries, perhaps the planting will go on.

Older people in N'Djamena - where the conference is being held - talk anecdotally about how the capital city has become a dustbowl over the last 20 years as the Sahara Desert has encroached southwards. The country has made efforts to plant a green belt of trees around the capital, and tens of thousands of young trees are being grown in nurseries on the outskirts of the city, she says [BBC News].

It'll take more than money to get the wall going. Project leaders must now decide which trees to plant—preferably native, drought resistant ones. They're considering 37 species. Red tape may hold back the green wall, but the idea itself is no crazier than others proposed to counter Saharan sprawl. Here at 80beats we've covered proposals to set up vast irrigation and desalination plants to turn the desert green

, and using a bacterium to bind the sand grains together

as a rather different kind of "wall." Related Content: 80beats: To Save the Planet from Global Warming, Turn the Sahara Green

80beats: Can Bacteria Create a Cement Wall To Hold Back the Sahara

DISCOVER: How To Make a Desert