A New Record Linked to Climate Change Was Just Set in Greenland. It May Seem Esoteric, But It's Really Important.

The animation above shows changes in the amount of sunlight reflected by snow on the Greenland Ice Sheet between May 21 and July 14, 2015. Warm colors show areas where reflectivity, or "albedo," was low. A record low occurred in early July. (Images: Polar Portal. Animation: Tom Yulsman) Back in early July, unusual warmth helped trigger a sudden and dramatic spike in melting at the surface of Greenland's ice sheet. Exactly what was happening, and whether the trend would continue, was unclear.

Two weeks later, we now know that while the extent of surface melting is still significantly above average, it has not come close to breaking the record (at least not yet). At the same time, another significant milestone has been reached: The amount of sunlight reflected by snow on the ice sheet's surface plummeted during the first week of July to the lowest levels seen in the 16 years that it has been measured by satellite. (Check out the black line in this graph.) Reflectivity of snow is not as esoteric as it may seem. It's actually an important climate variable — one that played a critical role in Greenland's record-setting surface melt in July of 2012. At that time, just a little less than 100 percent of the surface experienced melting. It was an astonishing event, and warm temperatures were partly to blame. But so was another factor: darkening of the snow by soot from wildfires burning many hundreds of miles away. And as you'll see in a minute, soot may have been a factor this summer too. 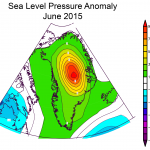 Dome of high pressure parked over Greenland. (Source: NSIDC) When snow at the surface melts, and even when it warms just shy of the melting point, it will become darker. This causes its reflectivity, or "albedo," to drop. Although this summer started out cold and snowy in Greenland, by the second half of June, "temperatures were everywhere markedly higher than average," according to the National Snow and Ice Data Center. Those warm temperatures, as well as bright, sunny skies, were linked to a dome of unusually high atmospheric pressure that formed over Greenland in June. This was in keeping with a trend in recent decades of higher pressures over Greenland and part of the Central Arctic Ocean during summer.

The animation above shows movement of smoke plumes around the Northern Hemisphere from July 1 through July 14, 2015. It was made from data collected by the Suomi NPP satellite. Lower aerosol concentrations in the smoke are shown in yellow, and higher concentrations in dark orange-brown. Gray indicates areas where data were unavailable. (Source: NASA Earth Observatory.) The surface of an ice sheet can also become darker when winds carry soot in from distant wildfires. And, in fact, by early July smoke traveling west from wildfires in Alaska, and drifting east from conflagrations in Canada, converged over Greenland. We'll have to wait until data from surface surveys are available to know how much of an impact wildfire soot may have had on the surface of the Greenland Ice Sheet in early July. We do know that during 2012's record melting, it turned out to be a key factor. That year, temperatures at the surface were unusually warm, and those balmy conditions were enhanced by a low layer of clouds consisting of tiny water droplets. The cloud layer was thin enough to allow sunlight to pass through and help melt the surface. At the same time it was also thick enough to trap a significant amount of thermal energy being radiated upward from the surface. But a study published last year suggests those factors alone probably weren't enough to cause surface melting in the high, dry central region of the ice sheet. Yet melting happened there too — because soot from distant wildfires had lowered the albedo of the snow below a critical threshold, the researchers found. And that's why albedo — however esoteric the concept may seem — is really important. In fact, global warming, wildfires, albedo, and melting snow and ice, are all potentially tied together in a reinforcing feedback loop. Here's how: Warmer temperatures due to human activities have been contributing to increased wildfire activity. This has caused darkening of the snow in Greenland, which — as we've seen — has helped lead to increased melting at the ice sheet's surface. More melting of the ice sheet's surface decreases its albedo, which causes still more melting. Now, add in more global warming from human activities, and you've got more fires, lower albedo, more melting, lower albedo, etc., etc. In 2012, the biggest spike in surface melting in Greenland occurred about mid way through the warm season. That's where we're at right now. I wouldn't bet on a similar event happening this year, because it would take an extraordinary confluence of events. Extraordinary, but not impossible.