A Moonlit Shield of Clouds — As Seen From Space 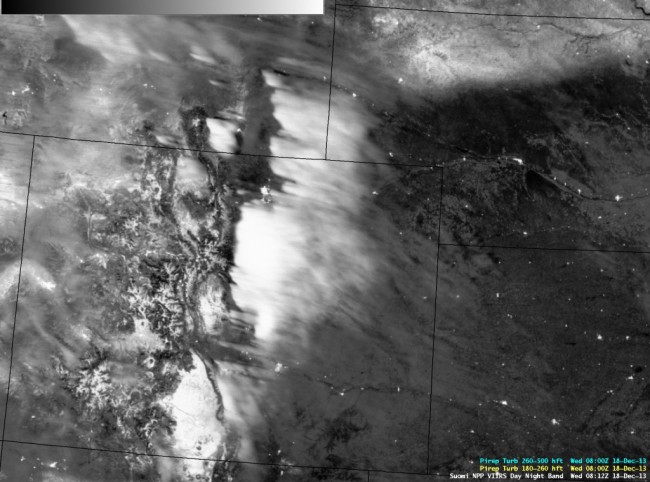 An orographic cirrus cloud formation on the eastern side of the Rocky Mountains, as seen at night by the Suomi NPP satellite on 12/18/13. (Source: CIMSS Satellite Blog) | Updated 12/20/13 with a second image below. |  On Dec. 18th, 2013, an almost full moon enabled the Suomi NPP satellite to capture this unusual visible-light image of a spectacular cloud formation along the eastern slope of the Rocky Mountains in Colorado and Wyoming. You can tell it's nighttime from the points of light that are most clearly visible in the right portion of the image. These are towns out on the high plains of Nebraska and Kansas. The white stuff that seems to streak off the mountaintops comprise what's known as orographic cirrus clouds. (Caveat: The white patches at lower left and upper right are actually snow on the ground.) These clouds can form on the lee side of a topographic barrier — like a mountain range — as strong winds blow across it. That appears to be what's happening here. They can affect temperatures during the day, particularly in the cold season, by acting as a kind of shield that reduces the amount of sunlight that reaches the ground. Meteorologists can have a difficult time forecasting temperatures when this kind of cloud formation takes shape. That's because the models they use can give contradictory forecasts about how long the cloudy shield may persist. That's what occurred on this day, with one weather forecasting model predicting that the clouds would dissipate by midday, while another suggested that they would persist. The first model turned out to be right — and as the clouds dissipated, temperatures got pretty warm for this time of year along Colorado's Front Range. (Here in Boulder, some students on the University of Colorado campus donned shorts that day.) 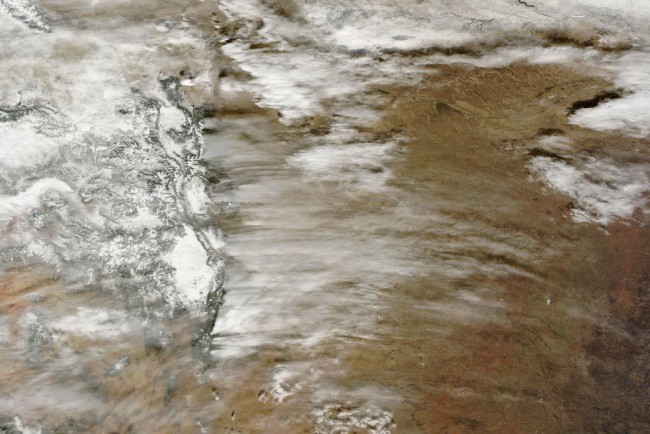 A view of the same region during the day on Dec. 18, captured by NASA's Terra satellite. (Source: NASA) For more imagery of this event, please head over to the fabulous Satellite Blog of the Cooperative Institute for Meteorological Satellite Studies. The image up top is one frame from an animation that you can find on their post about this phenomenon. You might also be interested in this blog post from the Regional and Mesoscale Meteorology Branch of NOAA/NESDIS, which is located at Colorado State University.