A ‘Blue Blob’ Is Slowing Glacier Melt In Iceland

A large cool zone that has developed in the North Atlantic may delay some of the worst effects of climate change, but only temporarily. 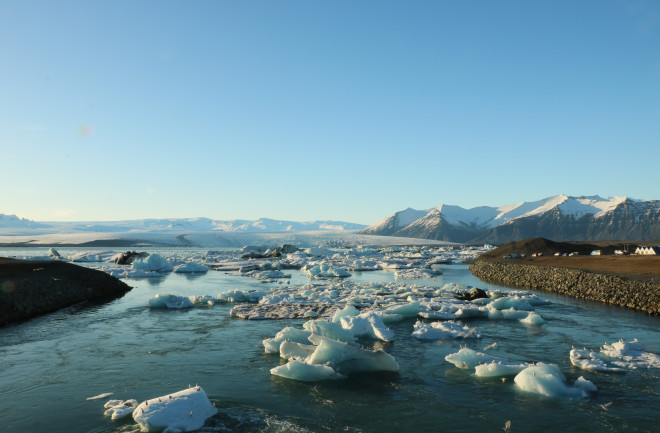 (Credit: Joshua Rapp Learn) The Jökulsárlón lagoon on the edge of the Breiðamerkurjökull glacier which itself is an outlet of Vatnajökull—the largest glacier in Iceland.

A massive zone of cool water in the North Atlantic Ocean is slowing the melting of Iceland’s glaciers.

But the so-called Blue Blob, an anomaly in an otherwise warming ocean, may only be around for a few decades before the overall trend of warming takes over again, according to new research.

“Even though this Blue Blob seems to be good news for the glaciers, it’s still only temporary,” says Brice Noël, a climate modeler at Utrecht University.

What is the Blue Blob?

The Blue Blob is visible by satellite. It sits south of Iceland and was coldest in the winter of 2014-2015 when it was roughly 1.4 degrees Celsius (2.52 degrees Fahrenheit) colder than normal.

Scientists aren’t completely sure how the Blue Blob developed, but some believe it’s linked to a weakening of the Atlantic Meridional Overturning Circulation (AMOC), a system of currents that circulate warm water northward from tropical zones. As less warm water travels northward, a cold zone has developed in the region even as the rest of the ocean around it tends to be warming due to climate change. This may have caused the Atlantic Warming Hole — a long-term cooling trend in the region over the past century that predates the Blue Blob and led to the cooler ocean in the region.

Noël and his colleagues wanted to see whether the cooler ocean nearby had any effect on the melting of glaciers in Iceland. In a study published recently in Geophysical Research Letters, they calculated the mass balance of glaciers starting from the late 1950s through recent years — a figure that compares the amount of ice melted in summer with the amount of ice gained during the winter through snowfall.

The researchers found that the glaciers lost a good degree of mass starting in 1995, when melting exceeded any gains from snowfall. On average, Icelandic glaciers lost 11 gigatons of water per year from 1995 to 2010. A gigaton equals a cubic kilometer of water.

But in 2011, the melting began to slow. “After 2011, what was really striking is that this mass loss was slowing down,” Noël says.

On average, Icelandic glaciers only lost five gigatons of ice every year since then — less than half of what they were losing from 1995-2010. Models revealed that the Blue Blob was largely responsible for the stymying of the melt, as the cooler waters result in a cooler atmosphere above Iceland.

The Future of the Blob

After honing their models to better account for what scientists had measured about glaciers and oceanic and atmospheric conditions, Noël and his colleagues used the same models to predict what would happen in the future in a strong warming scenario that assumed humans did nothing to mitigate the release of greenhouse gases.

“We found the Blue Blob would actually persist until the mid-21st century,” Noël says. By the end of the 2040s, the loss of ice may even stop completely.

But the cool times won’t last. Projections show that in the second half of this century, warming in the Blue Blob area will prevail again, and glaciers in Iceland will start leaking mass. By the end of this century, Iceland’s glaciers will still lose a third of the volume they contain right now in a strong global warming scenario.

The loss of these glaciers will contribute to a three-millimeter rise in sea level by the end of the century. While this may not seem like much compared to the massive ice sheets of Greenland or Antarctica, Noël says that small glaciers worldwide are melting fast, playing a major role in rising sea levels. And the slowing of the loss of Iceland’s glaciers was not felt in nearby Greenland, where ice sheets continue to melt at a high rate. By 2300 in a strong warming scenario, all of Iceland’s glaciers could be gone.

The only way to slow the loss of these glaciers in the long-term, Noël says, is to mitigate the release of the greenhouse gases that contribute to climate change.