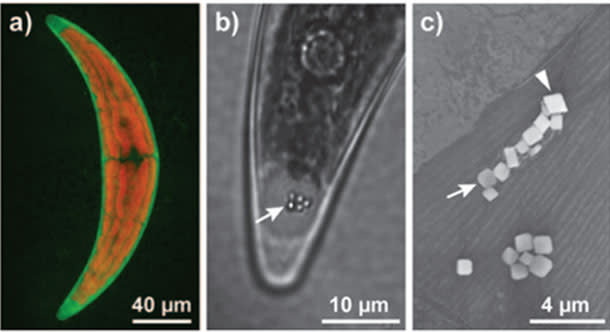 In the future, nuclear clean-up workers may be getting help from some surprising sources. None of these three methods are in widespread use right now, but they show promise: 1) Algae

What's the Context: The danger of strontium-90 is that it is chemically similar to calcium, and so can be taken up into milk, bones, and other tissues. Nuclear waste and spills can contain significant amounts of strontium; C. moniliferum is especially helpful because it can precipitate strontium but leave calcium alone (calcium is different enough from barium that the bacteria doesn't crystallize it). Not So Fast: Scientists don't yet know how well the algae can withstand radioactivity, which could potentially put a damper on this clean-up method. Now, the scientists would like to find ways of increasing sulphate levels in the environment, which may in turn increase the ability of the algae to crystallize strontium. 2) Green Rust

Not So Fast: Because it's so reactive, green rust is rarely found in the natural environment. (Though the researchers hope to find ways of increasing concentrations.)3) Bacteria

What's the Context: The E. coli process actually dates back to 1995, but more recently the researchers started using inexpensive inositol phosphate, which makes the process six times more effective. Not So Fast: For some countries that have ample and cheap supplies of uranium, such as the U.S., this uranium recycling may not be so popular. But it would be especially useful for countries like England. Harvesting and recycling uranium could make nuclear energy even greener. References: Krejci, M. R., et al. "Selective Sequestration of Strontium in Desmid Green Algae by Biogenic Co-precipitation with Barite." ChemSusChem. doi:10.1002/cssc.201000448. Christiansen, B.C. et al. "Neptunyl (Np) interaction with green rust, GRNa,SO4." Geochimica et Cosmochimica Acta.