ExxonMobil pipeline bursts beneath the Yellowstone River in Montana, spilling 40,000 gallons of oil into the pristine area. 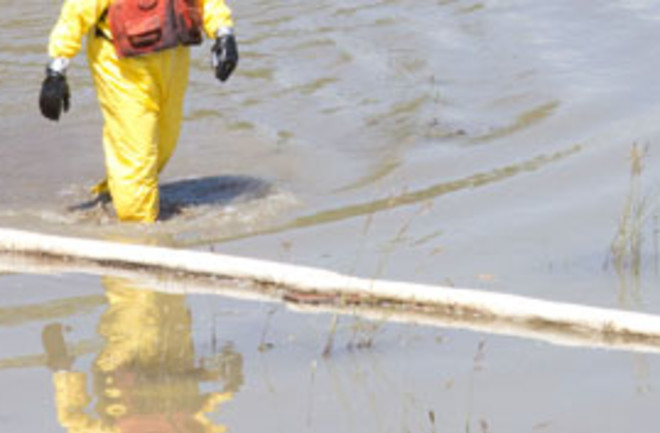 Containment booms at the confluence of the Yellow Stone and Clark's Fork rivers. | <a href="www.flickr.com/photos/usfwsmtnprairie/5919513563/sizes/o/in/photostream/">USFWS Mountain Prairie</a> via Flickr

On July 1 an ExxonMobil pipeline burst beneath the Yellowstone River in Montana, spilling more than 40,000 gallons of oil into the waterway before responders could seal the leak. Black oil coated river plants, murky brown residue collected in eddies, and 140 local residents had to evacu ate the area because of fumes. In the absence of dams to contain the spill, the oil traveled as far as 240 miles downriver. “We’re not limiting the scope of our cleanup to the immediate site,” Gary Pruessing, president of ExxonMobil Pipeline Co., an ExxonMobil subsidiary, told the press last July. “We are not trying to suggest in any way that’s the limit of exposure.”

No official cause of the spill had been determined as of last November, but flood conditions in the river may have stirred up floating debris that damaged the pipeline. ExxonMobil admitted that the pipeline had been used to transport a molasses-like form of crude extracted from tar sands in Canada. Such oil contains abrasive sediments and has a high acid content that could corrode pipelines. (The United States imports about 600,000 barrels of raw tar-sands oil a day from Canada, up from about 100,000 barrels a day in 2000.)

The Yellowstone spill raises questions about the adequacy of federal pipeline regulation, particularly in the wake of other recent accidents, such as an even larger spill into the Kalamazoo River in Michigan in 2010. In response, the Senate unanimously passed a bill in October that aims to tighten pipeline safety requirements. “The Yellowstone spill has been a turning point in public perception,” says Anthony Swift, a policy analyst at the Natural Resources Defense Council. “That’s a good thing, because the U.S. pipeline system is showing signs of wear and tear.” Only better planning, scrupulous oversight, and stringent pipeline maintenance, he says, can prevent a repeat of the Yellowstone spill.