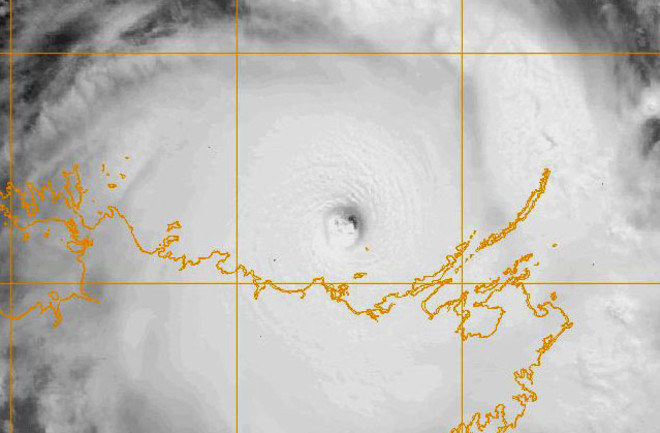 Cyclone Monica on April 24, 2006, possibly the strongest recorded hurricane in the Southern Hemisphere. So: According to Jeff Masters, there were 21 Category 4 or 5 hurricanes globally in 2006. Zero of them were in the Atlantic, which makes the total number sound even more staggering. I actually disagree with Masters on this; after doing my own count using Wikipedia, I only get 20 of these storms; and after doing my own count with the "best track" data provided by Unisys Weather, I get 19. But we'll get to that in a minute. First, let's talk about what the number, whatever it is, actually signifies. According to Masters, the long term average for the number of Category 4 and 5 storms globally in a year is 17. So whatever the correct number is, 2006 sounds like an above average year (albeit perhaps only slightly). And if you've got enough above average years, well, you might have a trend. A scary one. But as you may know, there's still a big debate about whether such a trend exists, and whether these strongest and deadliest hurricanes are actually increasing globally. We can't identify a trend without knowing what the past was like, but our past data on intense storms has been called into question by scientists like Chris Landsea, who think these storms were undercounted in previous years because our technologies for measuring storm intensity weren't as dependable back then. Because of this ongoing debate, we can't really know what to make of the fact that there were 21 (or 19, or 20) Cat 4 and 5 storms this year. But we can say one thing: Clearly, you can have a dead year for the most intense hurricanes in the Atlantic but still have a very active year for them globally. But now, let's get into the numbers. First, I did a search using Wikipedia. This isn't the same as going straight to the "best track" data, but I find that the Wikipedia people are generally pretty good with hurricane basics. Plus this allows me to provide links. Based upon my searching of Wikipedia, I only count 20 Cat 4 and 5 hurricanes for 2006. I have listed them alphabetically by basin:

So, why do I get 20 storms and Masters 21? First, I don't know whether Masters is using Wikipedia or some other source. But one possible reason for confusion is Ioke, which crossed basins from the Central Pacific to the Northwest Pacific. On Wikipedia, Ioke is listed both under 2006 Pacific Hurricanes and under 2006 Pacific Typhoons. Similarly, Unisys Weather lists Ioke for both the East Pacific and the West Pacific. Masters counts 3 Cat 4-5 Northeast Pacific storms and 10 Cat 4-5 Northwest Pacific storms, but that's only possible if you count Ioke twice, in my opinion. There are other possible sources of confusion in the data as well. For example, in addition to double-listing Ioke, Unisys Weather lists Cyclone Monica in both the South Indian and the South Pacific. This too could lead to double counting. Finally, Wikipedia gets smart and categorizes Cyclone Larry as a Cat 4 on the Saffir-Simpson scale, whereas Unisys classifies the storm as a Cat 3. I'm not sure who's right, but again, this could introduce confusion. Anyway, I'm going to go with the number 19, trusting the Unisys data on Larry rather than Wikipedia's interpretation, and only counting Ioke and Monica once each. By these lights, both 2004 and 2005 were more staggering global years than 2006. According to my quick Unisys count, there were 23 Cat 4 and 5 storms in 2004, and 22 in 2005. In each case, that has a lot to do with the fact that there were plenty of Cat 4 and 5 storms in the Atlantic during these years. Of course, this method of intense storm counting is itself simplistic. As scientists like Kerry Emanuel have pointed out, it's not at all clear why we should be counting a record-breaking long lived intense storm like Ioke on a par with a much shorter-lived Cat 4 storm like, say, Bondo or Xavier. But that opens up a whole different can of worms.... P.S.: Masters lists 101 total tropical cyclones. As the average is 80-90 (he puts it at 86), this also seems significantly high. P.P.S.: It's easy to make little bone-headed errors with this kind of counting, so I may well have done so....anything caught will of course be corrected. P.P.P.S.: The National Climatic Data Center also categorizes Larry as a Saffir-Simpson Cat 3. Wikipedia seems to be improvising.