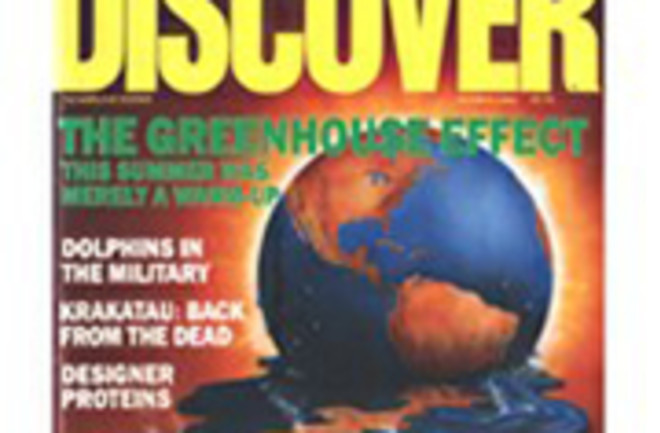 Exactly twenty years ago, on June 23, 1988, James E. Hansen of the NASA Goddard Institute for Space Studies testified to a Senate committee that he could state with "99 percent confidence" that a recent, persistent rise in global temperature was occurring, and had long been expected. That landmark statement, and the dawn of the global warming discussion, was covered by Andy Revkin, then a DISCOVER senior editor and now an environmental reporter for The New York Times. (More discussion of Hansen's testimony can be found on Revkin's blog.) Revkin kindly agreed to take our questions about his piece. Q: How, if at all, were the 1988 predictions wrong? A: Not much was really wrong. The range of warming projected—a doubling of greenhouse gas concentrations from the preindustrial norm—remains similar today. The things that were uncertain in 1988 remain uncertain now, including the mix of warming and cooling influences in clouds. As Steve Schneider, a climate modeler at the National Center for Atmospheric Research in Boulder, Colorado—who is still a frequent source of mine—put it in 1988:

"Clouds are an important factor about which little is known... When I first started looking at this in 1972, we didn't know much about the feedback from clouds. We don't know any more now than we did then."

The estimates for sea-level rise in the article were three to six feet (for doubling of greenhouse gases) and that estimate, officially at least, has gone down. But some experts still see a real chance of one or two meters of sea-level rise within a century, so it hasn't gone away. Kerry Emanuel, the hurricane expert at MIT, predicted up to a 50 percent rise in the intensity of strong cyclones then, and has since scaled that projection way back. The mix of impacts predicted for agriculture in tropical and temperate regions is pretty much unchanged. One thing entirely absent from the discussion at that time was nonlinear change. That's because the important ice cores had not yet been pulled from Greenland, showing dizzyingly fast changes in climate at the end of the last ice age (later linked to circulation changes in the ocean). In those days, all the curves looking forward were gently sloping. Another absent concept was ocean acidification. The issue arose out of climate science, so the basic chemistry of CO2 in water hadn't really hit people. Q: You wrote in the article that "some parts of the world could benefit from climate change." Do you still think this is true? A: Yes. Last year's IPCC reports made it clear that longer growing seasons and increased precipitation in middle latitudes would—at least up until mid-century—likely benefit agriculture overall. Many people, including many scientists, look to warming in Russia as a potential boon. My 2007 "Climate Divide" series in The New York Times pointed out that, at least in terms of climate impacts, the world is definitely not flat. Q: Did you have any doubts, while you were working on the piece, about the accuracy of the science? A: I think the piece had an appropriate level of caveat, and I still find myself citing Steve Schneider's statement that I quoted, which emphasized the importance of uncertainty as a reason for action:

"We're altering the environment far faster than we can possibly predict the consequences... This is bound to lead to some surprises."

Q: Have you had any doubts since then? A: My stories have become slightly more nuanced over the years, as the body of science on particular questions—hurricane intensity, the rate of sea rise, regional climate change—has evolved. Back then, the Intergovernmental Panel on Climate Change had only just been conceived, mind you, so the whole field was nascent and ideas had not yet been rigorously tested. But the basics remain robust, as I've been writing a lot lately on my blog and in print: More CO2 equals a warming world, which equals less ice plus higher seas plus lots of changing climate patterns (and now a dropping pH in seawater). Q: How was the article received in the scientific community, and among your readers? Was there any fallout? A: I really don't recall much about reader reaction. There had been quite a bit of coverage during that summer, so it wasn't a total shock to anyone. Q: Has it been frustrating, watching the sluggish response to climate change over the past twenty years? Did you expect that more of an effort to halt/curb the problem would be underway by 2008? A: I've written many pieces since then about the extraordinary nature of this problem and why it is so hard for the public, and political systems, to act meaningfully now to curb a long-term risk. It is very much like the movie Groundhog Day sometimes. Waking up and starting all over again. I do think I conveyed at the time just how hard dealing with this issue was going to be. It's interesting to see now that [the piece] accurately predicted that the first greenhouse gas to be dealt with would be CFCs (which are also ozone destroyers). But the story also accurately described what has since proved to be one of the greatest challenges to global warming—dealing with the emergence of China:

And even as the developed nations of the world cut back on fossil fuel use, there will be no justifiable way to prevent the Third World from expanding its use of coal and oil. How can the developed countries expect that China, for example, which has plans to double its coal production in the next 15 years in order to spur development, will be willing or even able to change course?

Q: Did you anticipate that there would be such vehement denial about the issue? A: By 1992, as the first climate treaty was being negotiated, the skeptics had gotten into high gear, and while some skepticism served (and still serves) a valuable purpose, it was clear already by then that others were mainly raising doubts to delay action on emissions restrictions. What's been harder to accept—as a career science writer—is how few people seem to understand that uncertainty and dissent are both normal parts of the scientific journey, but not reasons to ignore a problem that has stood the test of time and scrutiny and still poses a clear risk worth mitigating. [Read More: Hansen's guest post at Gristmill]