Learn why it’s highly sought, out of this world and a builder of countries. 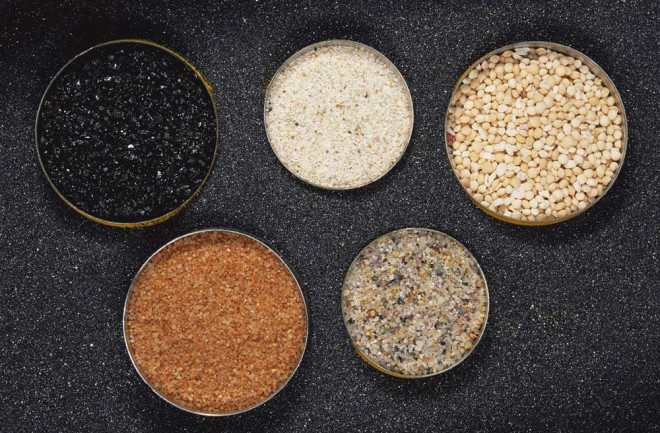 1. Got sand? You probably do, in your kitchen pantry. Sand is defined as any material made up of grains within a specific size range. Sugar and salt typically qualify.

2. Much less common, however, is gypsum sand, which gives White Sands National Monument in New Mexico its name. The site’s unusually high concentration of the rare variety started out as a shallow seabed about 280 million years ago.

3. The material most commonly thought of as sand is silica, made of quartz crystals that have broken down about as far as they will naturally, to about a millimeter in diameter.

4. At the beach, silica sand mixes with fragments of coral, shell and other material of biological origin.

5. While sand of all sorts is usually made by material breaking down into smaller pieces, in water with high concentrations of calcium carbonate or certain other minerals, the opposite can happen. A tiny particle gets coated over time by the minerals, resulting in a special type of sand grain called an oolith.

6. Members of Palythoa, a genus of coral, can be up to 65 percent sand by weight; they use the material to build their frame, making them more resistant to climate change effects such as ocean acidification.

7. Humans also use sand as a construction material, mining huge quantities of it to make concrete.

8. There’s such high demand that an illegal worldwide sand market has exploded in recent years. A 2013 estimate valued the shady business at about $16 million a month.

9. India’s sand mafia (yes, it’s a thing) is notorious for using violence, bribery and coercion in the course of illegally collecting and selling the material.

10. More than legitimate business is at risk: Sand is a finite natural resource which, like fossil fuels, takes centuries to form — and which humans are using at accelerating rates. In 2014, the U.N. Environmental Program declared that sand mining was causing “unequivocal” environmental problems.

11. A 2017 study linked the mining to increased coastal erosion, especially devastating in regions prone to tsunamis. Without sandy buffers, the deadly waves are even more destructive, and a retreating tsunami drags sand into the ocean, aggravating the problem.

12. The process of digging up sand can also contaminate groundwater or drive it deeper underground. As a direct result of the practice, farmers in Sri Lanka have difficulty finding clean water to grow crops.

13. When sandy habitats are mined, plant and animal life can get carried away with the haul and invade new areas, crowding out native wildlife.

14. Some nasty species live in sand, too, such as parasitic insects called sand fleas. These tiny monsters burrow into a person’s skin and stay there for up to two weeks, eventually spewing hundreds of eggs.

15. Look closer, and you’ll see even more life: In 2017, researchers at the Max Planck Institute for Marine Microbiology found whole communities of assorted microbes living on the surface of single grains of sand.

16. Another reason to look at the stuff close up: Sand forensics experts can sometimes tell from the minerals present in a sample, as well as features like grain size, where the sand originated.

17. The investigative subfield is far from perfect, however. A 2016 study found that sand samples collected from rubber-soled shoes revealed only the most recent material the individual walked through.

18. That same year, another team analyzed samples from a scenic spot on the Turkish coast called Cleopatra’s Beach. Legend has it Mark Antony shipped barges of sand across the Mediterranean to create it for his queenly consort. The research results? Likely just a legend.

19. In modern times, large quantities of sand do get shipped across seas on a regular basis. Small coastal countries such as Singapore and the United Arab Emirates have imported vast quantities of sand to extend their land out in the ocean via man-made islands.

20. Builder of countries and coral, highly sought and the stuff of legends, sand is out of this world. Really. In 2016, researchers relied on measurements of sand dunes past and present on Mars to better understand the Red Planet’s ancient environment.