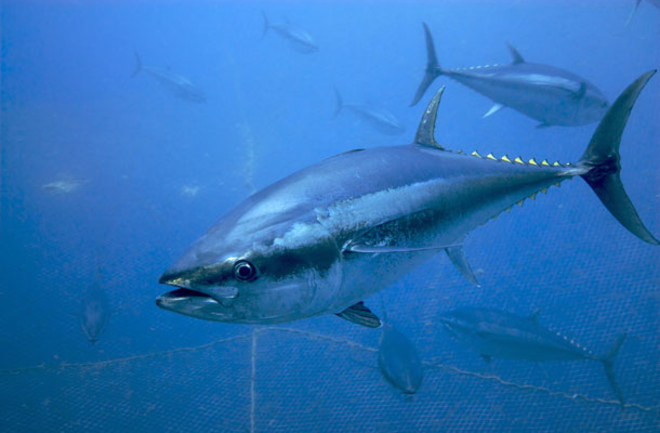 Underwater photographer Keith Ellenbogen photographed the Atlantic bluefin tuna both inside and outside of the massive underwater cages used by purse seiner fishing boats on a recent expedition with the watchdog non-profit Oceana. On this expedition, the crew on board the Marviva Med documented the impact of bottom trawling and driftnets on marine ecosystems, and identified marine areas that need protection. Ellenbogen says, “Each year, as they have done for thousands of years, bluefin tuna migrate to the Mediterranean Sea to reproduce. At this moment, I felt a sense of urgency as I observed populations much smaller than expected. I imagined what life must have been like only a few years ago when tuna were abundant, swimming free, and able to reach their true, glorious size.”

The Atlantic bluefin can live 40 years, grow to 15 feet in length and weigh up to 1,400 lbs. They are warm-blooded and able to stabilize their body temperature as they migrate across the Atlantic Ocean, and have been recorded swimming at speeds of up to 55 mph; the word “tuna” comes from the Greek word “to rush.” Bluefin are sought after for the high prices they fetch on the international sushi market: individual Atlantic bluefin tuna have been sold for more than $100,000. Scientists and conservationists fear the Atlantic bluefin tuna is especially vulnerable to extinction due to overfishing, given its low reproduction rate and late maturity, at 3-5 years.

Ellenbogen and a team of scientists observed the tuna being caught by large purse seiner fishing boats from Turkey, France, Spain, and Italy among other countries, with some illegally using spotter planes to locate the fish. The tuna are transferred from fishing nets underwater to cages approximately 300 feet in diameter and 80 feet deep where they are towed slowly (at a speed of about 2 knots) to coastal destinations a couple of days or even weeks away, where they are fattened and then sold to market.