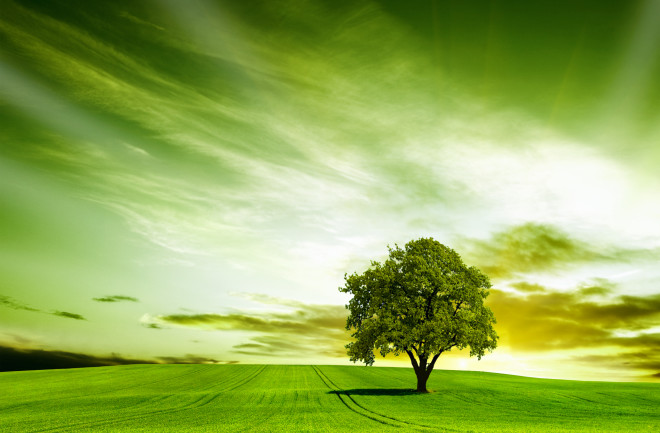 The prospect of a tornado is scary. But that anticipation gets downright creepy when a green ambiance settles in the skies ahead of time, coloring everything it touches with its unnatural hue.

Some people, particularly residents of the Great Plains or Midwest, think that green skies mean a tornado is sure to follow. In short, that’s not true: The two don’t always appear together. Since meteorologists don’t see the phenomenon as a reliable sign of tornado development, how it happens hasn’t gotten a lot of research. “Let’s say the sky turned hot pink every single time there was a tornado,” says Makenzie Krocak, a research scientist at the University of Oklahoma Center for Risk and Crisis Management. “Then we could look into it as a forecasting detail.”

Since color-changing skies and tornado appearances are unpredictable, tornado researchers have their concentration focused elsewhere — like ways to discourage others from wandering outside to examine the sky for signs of disaster.

The truth is, the field is still puzzling together information about how these storms start or what their first characteristics might be. Recent research suggests that a tornado's characteristic spirals build from the ground up, the inverse of the process meteorologists thought to be the case for decades.

If researchers are able identify how twisters form and land on concrete, early signs that one is coming, alerts to anyone who might be in the path can go out sooner. Right now, the average gap between when meteorologists issue a warning and when the tornado hits is 14 minutes, says Kelsey Ellis, a hazard climatologist at the University of Tennessee Knoxville. Investigations that might lengthen people’s short preparation window are the top priority.

That being said, a team of researchers probed the green-sky mystery briefly in the 1990s. Back then, a research program that’s still alive today, the Verification of the Origins of Rotation in Tornadoes Experiment (VORTEX), cruised around the Great Plains looking for extreme weather and collecting data to get more information about how they form. The researchers found that storms in Oklahoma and Texas sometimes looked green. When the crew aimed a device that measured wavelengths at the skies, the technology picked up on rays in the green portion of the visible spectrum. In other words, “there is green there — it’s not false, you're not making it up, but there are [only] green skies in some of the storms,” says Ellis.

VORTEX researchers hypothesized that the eerie hue comes from sunlight beaming through water-filled storm clouds. In the Midwest in particular, tornadoes tend to form later in the day, when the setting sun casts yellow, orange and reddish rays over the sky. The light going through the clouds intersects with water droplets (or potentially hail, a detail the researchers didn’t iron out). As the sunlight comes out the other side of the brewing storm, the interference of the blue water makes the light green. Only those in the direct path of the sunlight as it cuts through the clouds would see the result, which is why people in one area (but not in another) might see the sickly color during a storm, Krocak says.

We Love to Look

Green skies (or lack thereof) don’t mean anything about whether a tornado is coming — and any visual cues that might genuinely suggest an imminent threat are hard to read. Even professional storm chasers can struggle to connect what they see to radar results and gauge risk, Ellis says. But when she and her colleagues asked people who might receive a tornado warning what they’ll do after the fact, the most commonly agreed upon response is to go outside to look around. “I don’t know what they’re looking for,” Ellis says. But “if you have on average 14 minutes, but maybe it's more like six, then you take two minutes to put your shoes on, and then you go outside — then your tornado is suddenly four minutes away, and you may not be able to get somewhere safe.”

Ideally, people in the path of a tornado shouldn't waste time staring at the sky. So researchers are fine-tuning how meteorologists should communicate risk to get people acting responsibly, fast. Before tornado season — the periods of peak twister activity from spring into mid-summer, depending on the part of the U.S. — meteorologists might issue preparedness information and bust some myths. Though it’s not clear how many people believe green skies always indicate a coming tornado, surveys show that some think mountains or highways stop tornadoes (they don’t) or that the storms can’t cross rivers (they can). While it’s still relatively rare that people hold these beliefs and act on them, misconceptions are more common outside of places like Oklahoma and other traditional tornado areas, Krocak says.

Communication experts are also coordinating the kinds of alerts issued once it’s possible a tornado might touch down. Besides going outside, people also tend to check social media or local TV stations to verify any alerts they receive. If every outlet says the same thing and instructs identical behaviors — like telling people to charge their phones so they can get further notices — that might up the odds that people comply. “No matter what they see outside, if everyone's telling them to do the exact same thing, then hopefully they would do it,” Ellis says.

Above all, ensuring people have shelter is the most important step for making sure warnings are heeded. And the need for appropriate hideaways might be growing. Maps of tornado appearances suggests that twisters are becoming more frequent in states with some of the highest densities of mobile homes. People in these structures could be 15 to 20 times more likely to die during a hurricane than those in houses with foundations.

And in the world of meteorology, whether or not green skies appear pales in comparison to the larger picture. “We say that all the time,” Krocak says. “Your forecast could be perfect. But if people don't understand it, or if people have no way to respond to it, then it's not worth very much.”