X Marks the Spot of a Dramatic Asteroid Collision 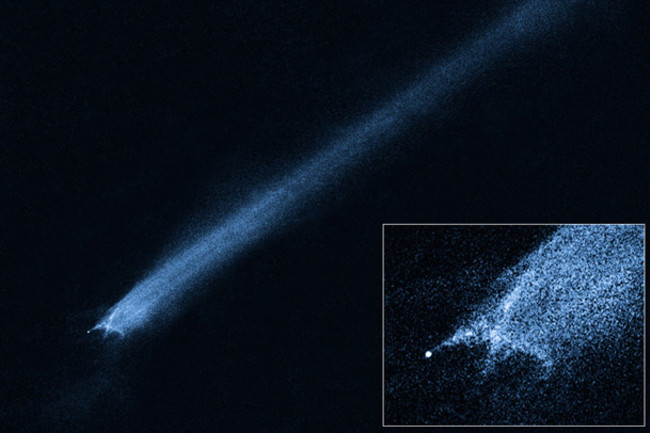 Out in the asteroid belt beyond Mars, two asteroids rendezvous-ed in the darkness, with explosive results. Atomic bomb level explosive. These two asteroids, one probably 400 feet wide and the other, smaller asteroid around 10 to 15 feet across, collided sometime in early 2009. This is the first time we humans have observed an asteroid impact right after it has occurred, and the first time a resulting x-shape has been seen. Researchers aren't sure what caused the novel shape, and they were surprised by how long the dust tail has lasted. The analysis of the finding, originally announced earlier this year, is published in Nature this week. From Phil Plait, DISCOVER's Bad Astronomer:

This is a false-color image showing the object, called P/2010 A2, in visible light. The long tail of debris is obvious; this is probably dust being blown back by the solar wind, similar to the way a comet’s tail is blown back. What apparently has happened is that two small, previously-undiscovered asteroids collided, impacting with a speed of at least 5 km/sec (and possibly faster). The energy in such a collision is like setting off a nuclear bomb, or actually many nuclear bombs! The asteroids shattered, and much of the debris expanded outward as pulverized dust.

Looking at the image, the bright spot to the left is most likely what’s left of one of the two asteroids, a chunk of rock estimated to be a mere 140 meters (450 feet) across. In the press release they’re not clear about the curved line emanating to the right of the nucleus. It may be — and I’m spitballing here — dust blown back from a stream of chunks, since the tail is broad and appears to originate from that swept curve, and not from the nucleus itself. The other filament perpendicular to the curve is from yet another piece of debris.

, which includes more information about why we should pay more attention to asteroids

. Since the first spotting, researchers have been tracking the collision site with the help of the Hubble Space Telescope, watching what happens over time.

"We expected the debris field to expand dramatically, like shrapnel flying from a hand grenade," said astronomer David Jewitt of the University of California in Los Angeles, who is a leader of the Hubble observations. "But what happened was quite the opposite. We found that the object is expanding very, very slowly." [NASA Press release]

These collisions give rise to a cloud of dust (which also forms the tail coming off of the collision site). Looking at the amount of dust created by this interaction caused Jewitt to re-think some assumptions about the origins of the solar system's dust.

"These observations are important because we need to know where the dust in the solar system comes from, and how much of it comes from colliding asteroids as opposed to 'outgassing' comets," Jewitt said. "We also can apply this knowledge to the dusty debris disks around other stars, because these are thought to be produced by collisions between unseen bodies in the disks. Knowing how the dust was produced will yield clues about those invisible bodies." [NASA Press release]

80beats: Was Mars’ Moon Phobos Born From a Violent Collision?

Bad Astronomy: Video of asteroid near miss from this morning