World Science Festival: "Science and Religion" Panelists Agree on Science, If Not Religion 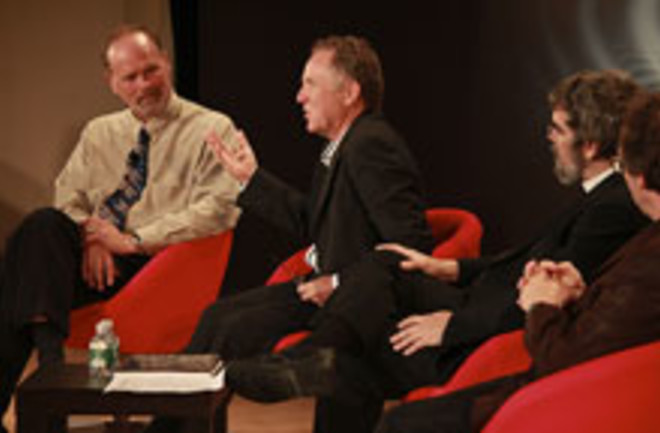 An assemblage of thinkers sat down on Saturday afternoon at The New School to talk science, faith, and religion. Befitting an event of New York City's World Science Festival, science was decidedly not on trial. Instead, the group—three practicing scientists and a philosopher, along with one journalist—took turns defining and professing their ideas about a supernatural force and the relationship of religious faith to science. Early on, moderator Bill Blakemore came understandably close to stumbling off the session’s lofty stated aim (a "nuanced conversation that transcends simplistic assertions") as he introduced the panelists and tabulated how many fell into several categories on the "scientist v. religious leader" spectrum. A list of statements handed out to the audience and beamed onto a screen before the presentation ("Religion is a social reflex," "Faith is what science and religion have in common," etc.) also proved to be a bit unwieldy when Blakemore asked each panelist to identify problematic items from the list. Colin McGinn dove right in, taking issue with the statement: "Atheism is a position of faith…as is religious belief," by deploying the analogy that no one would say it’s irrational to deny the existence of Santa Claus. But the list spurred panelist Guy Consolmagno to comment that unlike the one- or two-liners on the list, "great truths don’t fit on a bumper sticker," quipping, "I read that once on a bumper sticker." The panelists quickly dug deeper. Consolmagno, a Jesuit brother and astronomer at the Vatican Observatory, exhorted listeners not to foster preconceptions of what a scientific or religious person is. Fellow Roman Catholic Ken Miller burst at least a few preconceptions when he suggested that the virgin birth of Christ could be a metaphor, written to make people take notice of the importance of that birth. Lawrence Krauss (known for his writings on physics, especially via Star Trek) said that he doesn’t label himself an atheist—because like most scientists, he doesn’t think about God enough to even talk about the issue. Krauss never sat very deeply in this chair, as if to remind the audience of his discomfort and frustration over sitting on a panel on science and religion. "I’m frustrated that there’s a panel" on the topic, Krauss said, wringing his hands at the thought that such an event "unduly elevates religion." "If it weren’t for people like the Templeton Foundation that fund these things," he said, "we wouldn’t be here." Krauss distinguished his lack of interest in religion from the more strident position of Richard Dawkins. The question of whether God exists doesn’t matter, Krauss said—he just wants people to learn science and use it to make the world better. Miller readily agreed with Krauss about the importance of teaching evolution in schools, and said he had no qualms with joining forces with Krauss. After the presentation, Miller told DISCOVER, "Lawrence and I have fought together" to support the teaching of evolution, citing especially their efforts in Ohio in 2002. Related: Discoblog's Full Coverage of the 2009 World Science Festival