With the Mars InSight Lander Stuck, NASA Tries to Hack a Fix With Earthly Clones 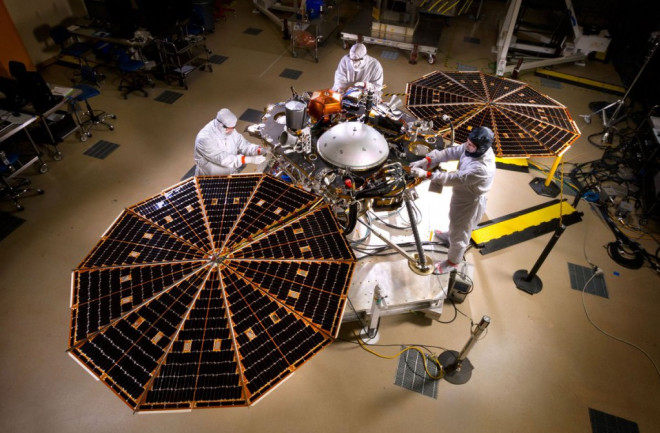 Last month, NASA’s Mars InSight lander started digging into the Red Planet. Its HP3(Heat Flow and Physical Properties Package) instrument was designed to burrow and measure Mars from underground, uncovering new geological evidence about how heat flows through the Martian soil. The part of this instrument that actually burrows into the ground is known as the mole. It was meant to penetrate up to 16 feet deep. But it stopped just hours after it starting digging. The mole only made it about a foot deep.

Since then, mission scientists have been hard at work trying to figure out how to get it going again. Their current best guess, according to Tilman Spohn, the HP3instrument’s principal investigator, is that the mole hit a rock or a gravel layer. But he admits that’s partly speculation. It’s also possible the drill is snagged on its own support structure somehow. The team needs to investigate all the possibilities before acting.

Testing at Home and on Mars

InSight's HP3 instrument has copies here on Earth that scientists can use to test while working on solutions. (Credit: NASA/JPL-Caltech/DLR)

InSight’s HP3 instrument has copies here on Earth that scientists can use to test while working on solutions. (Credit: NASA/JPL-Caltech/DLR)

To find out, the NASA team has turned to a suite of diagnostic tools, like InSight’s camera and other sensors. But they’re also trying to recreate the problem with engineering models here on Earth. InSight has a twin, currently located in Berlin, and many more copies of its various instruments, including the mole. And engineers have been practicing with these clone landers ever since the failure, trying to recreate the problem they’re seeing on Mars, and then devise a way to get the earthbound moles digging again. Only then will they try those fixes them on the real InSight.

Spohn points out that the whole process is slow, and it may be another month before the team is ready to try any fix-it attempts on Mars. Even once they devise a solution, it may require writing new software, testing it on the models on Earth, and then sending it to the real InSight before any action happens.

So, for the moment, the teams at both the German Aerospace Center, which provided the HP3 instrument, and at NASA’s Jet Propulsion Laboratory, which runs the larger InSight mission, are working together to find both the cause and possible solutions to InSight’s digging problem.

There are scenarios that might stop the mission where it stands. “If it’s a 1 meter (3 foot) block of rock at the spot,” Spohn says, “There’s no way we can handle that situation. The hope is that what we’re hammering against is a small rock, say half the size of the mole’s length. We could push that aside by continuing to hammer.” Spohn calls this the “brute force” approach.

One way scientists are considering to help the mole hammer down would be to press down on the mole or its support structure, probably with InSight’s arm, to lend it more force and limit any recoil. Right now, part of the problem might be that the mole is bouncing off the rock instead of driving through, so adding more pressure could help it dig down. But pushing down is not what the arm was designed for, which is why testing with the models on Earth would be so important before they try them on the $800 million craft on Mars.

If they keep hammering and bend or break part of the lander, there are no fixes on the Red Planet. “If you make a mistake, it’s gone,” Spohn says. But he also points out that if the mole starts to dig freely again, it could reach its target depth within about four hours, and it has plenty of energy left to do so. InSight itself runs on solar power, and was designed for two Earth years of duty. InSight only arrived on Mars in November, so it has lots of time left.

If the worst case arises and the mole can’t continue, Spohn admits, “We would lose a significant amount of science.” The mole needs to descend at least 10 feet to accomplish its goal of measuring heat flow from Mars’ interior. “But there are still things to be done,” he says. InSight’s other instruments are working as planned, and they would still get information from the foot of Mars dirt that InSight has been able to dig through. “It would still be stuff that hasn’t been done before,” Spohn says. “Not as bold as originally planned, but still good science.”