Could an alien observer truly understand the messages we have sent to the stars? 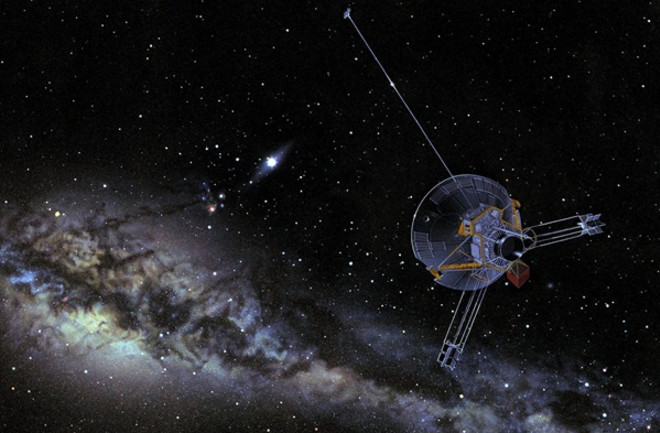 This artist's concept shows Pioneer venturing out into interstellar space. Both Pioneer 10 and 11 carry a plaque bearing a message from Earth. (Credit: NASA)

The Pioneer and Voyager spacecraft famously contain messages to anyone who might someday find them. Both Pioneers carry a plaque, while the Voyagers carry a phonograph record. An enormous amount of effort went into creating these objects, but could an alien observer truly understand the messages we have sent to the stars?

While we cannot take anything for granted when it comes to how these messages might or might not be interpreted, let’s assume that the beings who might find the spacecraft can at least see or hear with eyes or ears similar to our own. Each message was designed with not only the information it was to carry in mind, but also the means to establish understanding through common denominators found throughout the universe.

Pioneer 10 and 11 each carry a 6 x 9-inch (15 x 23 centimeters), gold-anodized aluminum plaque. The plaque is affixed to support struts close to the spacecraft’s bus (main body). Carl Sagan and Frank Drake played key roles in designing the plaque and Linda Salzman Sagan, Sagan’s wife at the time, was the artist who actually drew the images engraved on the plaque.

The most striking feature of the plaque are the figures of the man and the woman overlying the silhouette of the Pioneer spacecraft itself. While this does clearly convey our physical size and shape, as well as that sexual dimorphism is present in humans, the facial features of the couple have little detail and the sort of sensory organs are being depicted (the couple’s ears are barely shown at all) might be unclear. The man and woman both have their mouths closed, and viewers might not understand that these are even mouths at all. Given how the image is drawn, an observer could also be forgiven for not understanding that both the male and female have hair on their heads.

The couple both have a bland expression (which may have been an attempt to avoid anything that could be interpreted as hostile) and the man is seen raising his right hand with the palm facing the viewer. While this gesture clearly conveys a greeting when viewed by another human, an extraterrestrial may have no way of interpreting this gesture. (Could you interpret a gesture made by an antelope … or a praying mantis?) It does show, however, that humans have opposable thumbs, as well as the general range of motion of the upper limbs.

With regards to the scientific data presented, the top left of the plaque shows the hyperfine transition of neutral hydrogen as a means of conveying to the reader baseline units of time (0.7 nanoseconds, the frequency of the transition) and distance (21 cm, the wavelength of the light released by the transition). If one is able to deduce that the image is that of hydrogen, the time and distance should be understandable.

The plaque also contains a map of our sun relative to 14 pulsars as well as the center of our galaxy, conveying both the distances to the pulsars and their frequency in binary notation. As this image conveys copious objective data, a spacefaring species might well be able to easily interpret it.

Finally, the plaque contains a map of the solar system. The solar system map is likely among the more easily interpreted parts of the plaque, with Pioneer shown to have originated from the third planet. The plaque was created at a time when Pluto was still considered the ninth planet (before the discovery of other trans-Neptunian dwarf planets such as Eris and Sedna, among others), but it would still direct the reader’s attention to Earth if they were able to figure out that our solar system was the one depicted.

The Voyager record asks more of whoever finds it but gives more information in return. These phonographs, attached to the spacecraft bus, feature a cover illustration and over 90 minutes of audio on the reverse side. The cover illustration features the same image of hydrogen and the same pulsar map as found on the Pioneer plaque. Of critical importance, the Voyager records convey instructions on how to play them, such as how to affix the attached stylus, at what rate of rotation the record must be spun, and the proper waveform of signals generated by the record. It also explicitly tells the reader how to know if they are viewing the images properly via an engraving of what the first image (a circle) should look like. While this may seem very daunting, the challenge is primarily technical and might well be easily overcome by an advanced spacefaring species.

An alien species might well find more difficulty in interpreting the audio samples, music, and images contained on the record. There are over 50 greeting messages in different languages. While the specifics of the messages are likely to be uninterpretable, they would at least convey to the listener the diversity of the creatures who created the Voyagers.

Similarly, the musical selections chosen demonstrate a wide range of human musical styles (ranging from works of Beethoven and Stravinsky to those of Chuck Berry, among others). While the lyrics of “Johnny B. Goode” are probably gibberish to an extraterrestrial, the beat and rhythm of the song would convey a tremendous amount to an alien listener.

Of perhaps the greatest importance are the 115 images encoded on the record. The first six images, if decoded properly, provide immense technical data for the reader regarding mathematical definitions, scales and sizes, as well as additional information regarding our location and how to find us. Images of the sun and its spectrum, as well as some of the planets in our solar system, could help the discoverer of the Voyagers to find us should they decide to pay the Earth a visit. There are also approximately 20 medical and scientific diagrams including the structure of DNA and detailed images of human anatomy. These images could likely be interpreted correctly given their concrete nature.

The Voyager record also contains a plethora of images of humans engaged in a variety of activities (including eating, looking through a microscope, and even going on a spacewalk). While many of these images would be hard to interpret (e.g., a picture of a woman licking an ice cream cone or a photo of a string quartet) the images would at least convey that humans have created a complex civilization with some degree of advanced technology.

As Marshall McLuhan famously said, “The medium is the message.” While the recipients of the Pioneer plaque or the Voyager record might never understand everything we are trying to convey, the fact that these messages were placed on interstellar spacecraft carry (both for them and for us) a deeper message — that humans created these spacecraft and that we want to tell the universe who we are.