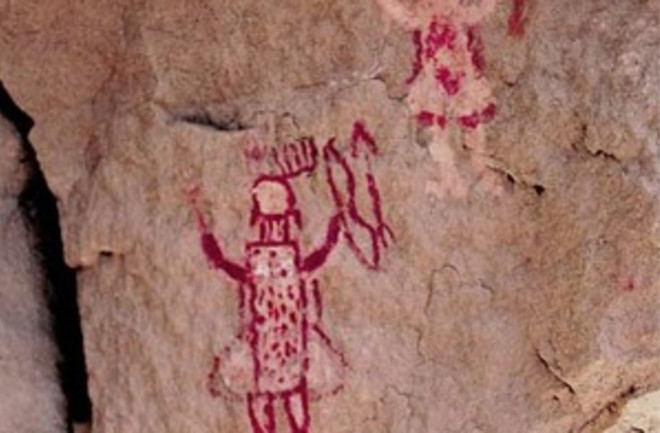 Myths about the Hero Twins, one of whom is shown holding a bow here, are an important part of Navajo identity.

In certain circles, there is a violent allergic reaction whenever someone suggests that religion and science are compatible. A particular type of atheist is especially vulnerable to this immune disorder. For example, P.Z. Myers, the evolutionary biologist and pugnacious blogger, became famously symptomatic at a 2010 gathering of atheists. After one participant suggested that non-religious people could still be spiritual, Myers nearly retched:

Whenever we start talking about spirituality, I just want to puke.

I hope Myers didn’t have too much to eat before reading the headline from this week’s commentary in Nature: “Sometimes Science Must Give Way to Religion.” The column, by Arizona State University’s Daniel Sarewitz, suggests that rational explanation of the universe’s existence, as advanced recently by discovery of the Higgs boson, can’t match the feelings evoked by spectacular religious symbolism, such as that found in Cambodia’s ancient Hindu temples, which Sarewitz explored this summer. He writes:

The overwhelming scale of the temples, their architectural complexity, intricate and evocative ornamentation and natural setting combine to form a powerful sense of mystery and transcendence, of the fertility of the human imagination and ambition in a Universe whose enormity and logic evade comprehension.

Science is supposed to challenge this type of quasi-mystical subjective experience, to provide an antidote to it.

But in the words of Time magazine’s Jeffrey Kluger, “our brains and bodies contain an awful lot of spiritual wiring.” Religion is the antidote our evolutionary history created. And even if you don’t buy that particular theory, you can’t simply dismiss the psychological and cultural importance of religion. For much of our history, religion has deeply influenced all aspects of life, from how we cope with death and random disaster to what moral codes we abide by. That science should (or could) eliminate all this with a rationalist cleansing of civilization, as a vocal group of orthodox atheists have suggested, is highly improbable.

For many—including scientists—religion is not just an emotional salve and existential life preserver, it’s also the glue that holds one’s identity together. For instance, I’ve covered archaeology stories located in the American Southwest that have put science at odds with the history that some Indian tribes hold on to. I’ve written about Native American archaeologists who “sometimes find themselves torn between their culture and their profession, as tribal traditions clash with scientific inquiry.” This tightrope was revealed to me while reporting another story, during time I spent with Taft Blackhorse, a Navajo archaeologist. My piece was about the intersection of Navajo history (as Navajos told it) and archaeology. Blackhorse was my guide; he straddled both worlds—the traditional worldview of his culture and the professional world of archaeology. This is what he conveyed during one of the stretches we were together:

When discussing Navajo history, he [Blackhorse] recounts famous oral stories in a matter-of-fact fashion. I’d get snippets, such as the one when we were driving across the Navajo reservation in Shiprock and he’d point to a particular mesa and say: “That is where the hero twins shot down thunderbird with a lightning arrow.”

This sort of thing happened everywhere we went, with Blackhorse describing key events in Navajo oral tradition, involving the Hero Twins, Changing Woman, and other mythical figures central to Navajo creation stories. The easy, conversational manner in which he communicated these stories puzzled me until I came across this passage in literary scholar Paul Zolbrod’s book on Navajo oral history: “Navajos commonly point to landmarks on the reservation made prominent by episodes in the creation story.” Zolbrod went on to explain: “If Navajos relate to their landscape in a special way it is because one version or another of the creation cycle is immediate and familiar to them, whether they are young or old, modern or traditional.”

I don’t know if Blackhorse literally believes the mythical stories he told me. But it was obvious how important they were to him, and how strongly they affirmed his cultural identity. As the title of Sarewitz’s Nature column says, “Sometimes Science Must Give Way to Religion.”

Critics of the column—and there are many of them—seem to misunderstand this. One reader in the comment thread writes:

But although Mr Sarewitz is clearly correct in pointing out that particle physics is an unsatisfactory way of understanding the world for the large majority of people, it is dangerous nonsense for him to conclude that religion is therefore an acceptable alternative, just because it makes them feel better.

I don’t believe this is what Sarewitz has concluded. He’s merely pointing out that some people, no matter their background, are prone to experience a more spiritual, as opposed to rational, connection to the universe. That doesn’t mean that spirituality will (or should) supplant science. Rather, I think Sarewitz is saying that certain needs unique to the human condition cannot be satisfied by science alone. Scientists who prefer a strictly rationalist lens have a hard time accepting this.

I can understand why many of them strongly feel that religious belief has no place in modern society. Absolutism is one of the uglier traits of religion that still pervades too many corners of the Earth today, breeding intolerance and normalizing abhorrent actions. But a response that indicts all religion as a stain on humanity is equally absolutist. It is also inconsistent with the spirit of science.

Keith Kloor is a freelance journalist whose stories have appeared in a range of publications, from Science to Smithsonian. Since 2004, he’s been an adjunct professor of journalism at New York University. You can find him on Twitter here.