Why Do Scorpions Glow in the Dark (and Could Their Whole Bodies be One Big Eye)?

Scorpions glow under UV light, and new research is starting to figure out why that might be. 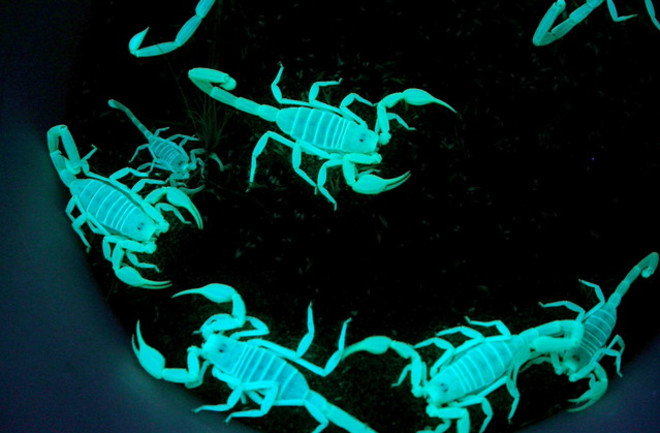 If you’re the type of person who looks for scorpions, rather than runs screaming at the thought of them, then you’re in luck. Scorpions are easy to find. Just go into the desert in the middle of the night, and switch on an ultraviolet (UV) light. Under the beam, scorpions glow a vibrant blue-green, lighting up like beacons against the darkness.

No one knows why scorpions glow. Some have suggested that it’s accidental — the two chemicals responsible for the glow could be by-products of normal chemical reactions. Others proposed that scorpions could glow to lure their prey, although it seems that insects actually avoid fluorescent scorpions. The glow could warn predators or help scorpions to recognize each other, although neither possibility has been tested.

But Douglas Gaffin from the University of Oklahoma has a more intriguing idea. He thinks that scorpions glow to convert the dim UV light from the moon and the stars into the color that they see best — blue-green. This could explain why scorpion eyes are so exquisitely sensitive, to the point where they can detect the faint glow of starlight against the background of the night sky. They amplify those faint signals by turning their entire bodies into light collectors.

Why bother? In the open, scorpions are vulnerable to rodents, owls and other predators. They like shelter, and they’ll instinctively flee from light in an attempt to find it. In the wild, you’ll often find them in the shade of a single twig or blade of grass. Gaffin thinks that scorpions could easily find such hiding spots by sensing light with their entire bodies. Any object that casts shade upon their skin could reduce its glow and indicate a potential hiding place.

In 2010, Carl Kloock found evidence for this idea. He overexposed scorpions to UV light to use up the fluorescing chemicals in their skin (which break down as they glow). Kloock found that scorpions that could still glow stuck to a sheltered area, while the others spent more time in the open.

Inspired by Kloock’s work, Gaffin decided to see just how the eastern sand scorpion (Paruroctonus utahensis) would behave under differently colored light. He kept them in enclosed chambers, shone different colors on them, and measured how often they tried to scuttle away. The scorpions behaved similarly under blue-green and UV light, even though their eyes are much more sensitive to the former.

This is consistent with the idea that they’re using their glow to respond more strongly to UV than the qualities of their retinas would allow. After all, scorpions are active soon after sunset — the only time of night when UV light is more common in the sky than the colors we can see.

This might seem like a somewhat roundabout explanation. Surely the scorpions would be best off detecting UV light itself, rather than converting it to a different color? Gaffin acknowledges this, but he points out that scorpions only seem to have one type of light-detecting pigment in their eyes, which is tuned to blue-green. Their glow effectively gives them a second UV-sensitive pigment, without having to re-tune their first one.

Gaffin thinks that the scorpion’s entire body, from the stinging tail to the crushing pincers, collects UV light from the environment and convert it into blue-green wavelengths. These signals could even pass to the brain via clusters of nerves that are spread throughout the animal’s body. If this idea pans out, it means that a scorpion’s glow could increase the surface area of its eyes by a thousand times. The entire scorpion would effectively be one big eye.

Gaffin has some tentative evidence for this idea. When he covered the scorpions’ eyes with foil, they became less responsive to blue-green light, but not to UV. Perhaps their bodies were still picking up the glow produced by UV light, even though their eyes were blinded. However, Gaffin says that these results are difficult to interpret, and he has many more experiments in mind.

The ideal test would be to deplete the scorpion’s glowing molecules, as Kloock did, to see if they become insensitive to UV. Applying UV-blocking sunscreen to the animal’s body should have the same effect. However, Gaffin has found that both methods harm the animals, which might affect their behavior. He’s now trying to use sunscreen after first covering the scorpions with clear tape.