From play to protection, here's what dogs might be trying to tell us. 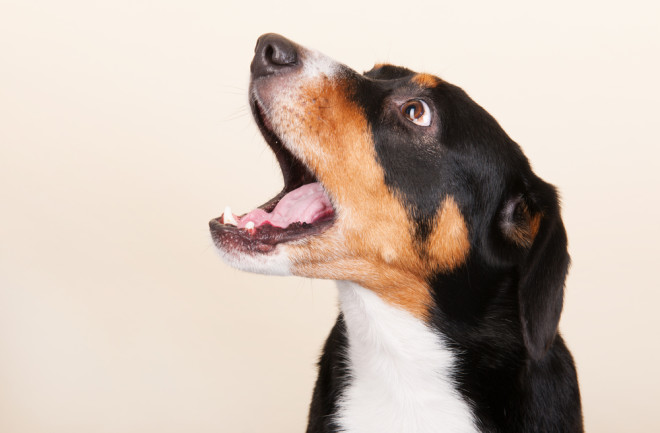 Is it even possible to write about why dogs bark without conjuring up the image of a particular Far Side cartoon? You know, the one which features a researcher donning an intricate dog decoder cap while listening in on the neighboring canines who are all apparently just saying, “Hey?"

The humor lies, of course, in showing the comic reader that there is no real big reveal here. However, change up the tone and body language of any “hey” delivered by a human and you get a wide range of meaning too — from a friendly greeting, a sudden realization or a show of irritation. “A dog’s bark is an intricate form of communication much like our voice,” says Linda Simon, a veterinary surgeon based in London, England.

And surprisingly, studies show people are pretty good at matching a dog’s bark to the reason for the bark, Simon adds — with even non-dog owners appearing just as adept at drawing meaning from the tone.

Though dog experts also suggest meaning can come down to the specific dog and given circumstance. “All behavior is situational and contextual,” says Russell Hartstein, a certified dog behaviorist and trainer based in Los Angeles. “There is no universal way to detect the message a dog's bark has behind it because all dogs are individuals.”

However, Hartstein points out that “pet parents” can learn to pick out the subtleties in pitch, rhythm and tone to get a good idea of a particular bark’s cause.

How Can Humans Best Read Their Dog’s Tone?

“Ever wonder why a low-pitch bark happens when you receive a package at your front door?” says Charli Burbidge, an animal behavior expert based in Manchester, England. “That's because an unfamiliar being is nearing the pack and your dog just wants to let you know he/she is on the lookout.”

Amber LaRock, a veterinary technician based in Chiang Mai, Thailand says deciphering these tones should get easier over time. “As you get to know your furry friend, you will likely notice the shift in their bark tone based on their current situation,” she says. “For example, a bark to incite playtime may be soft and cheerful, while a bark at an approaching mailman can be strong and assertive. The canine language has many layers, especially when you factor in canine body language as well.”

What Can We Learn from Body Language?

“Sometimes we think that our dog is barking at everything or absolutely nothing, especially when you're at home together relaxing,” says Burbidge. However, if you pay attention to other cues in the dog’s demeanor, it can help you decipher the message further. “If your pup barks incessantly while scurrying around the house or pacing back and forth across the room, it's time to take him/her to the backyard or dog park,” Burbidge adds.

Sarah Wooten, a veterinarian based in Greeley, Colo., says fear can bring additional clues in a dog’s body language which might include a tucked tail (or a tail hung low and slightly wagging), ears pinned down and back, panting, retracted lips (or lip licking) or showing whites of the eyes.

She adds that territorial defense is another common reason for dogs to bark, even if it makes little sense to their human owners. “The dog barks at any people or dogs who approach their house, yard (or) car,” Wooten says. “Territorial barking can also happen if they are barking while on leash because they are defending the area around their leash.”

Sometimes Barking Varies Based on Breed

“Some breeds are more prone to barking than others,” says Corinne Wigfall, a veterinarian based in Auckland, New Zealand. “This is common in working or hunting dogs, as their bark is used to help herd the animal they are working.”  Examples include huntaways and collie breeds that herd sheep. And beagles, which are used for hunting, use their bark to alarm their owner when they come across prey, Wigfall notes.

Is Barking a Result of Domestication?

If you look at wolves (from which dogs descend), these canines rarely barked, says Jonathan Roberts, a veterinarian based in Cape Town, South Africa. This notion was published in a 2013 book titled The Genius of Dogs: How Dogs are Smarter Than You Think by Brian Hare and Vanessa Woods, who say barking only takes up 3 percent of the use of wolves' vocal cords; wolves are often more likely to howl, whimper or growl instead of bark. “It is thought that the first domesticated dogs were selected for the trait of barking when aroused rather than showing signs of aggression,” Roberts says.

But Hare and Woods say in their book that research indicates there might be more to a dog’s bark after all with variations so subtle they may be better understood by their fellow dogs versus humans. “A dog’s bark can vary in amplitude, timing and even pitch in order to communicate their current emotional state,” says Roberts.

Research cited by Roberts and the book’s authors involved collecting dogs barking in two different states: One when the animals were alone and another when the dog was barking in response to a stranger. The barks were played back for other dogs with the “alone” bark eliciting little response compared to the “stranger” bark which perked up the dog’s full, immediate attention. The dogs also showed that they could recognize the specific dog in the recording in the same way humans can identify the voices of people they know.

When to Call Your Vet About Barking

Are you worried that your dog is barking too much? If so, experts say it’s important to rule out health concerns.

“It is important to first assess if the cause of barking is for an underlying health issue or in response to pain,” Wigfall says. “A full health check assessment is required by a veterinarian to establish if there is any neurological or health reason underlying the cause of the barking. Once that is ruled out, it can be assumed it is a behavioral cause in response to a specific scenario.”