Why Cosmonauts Have Never Splashed Down 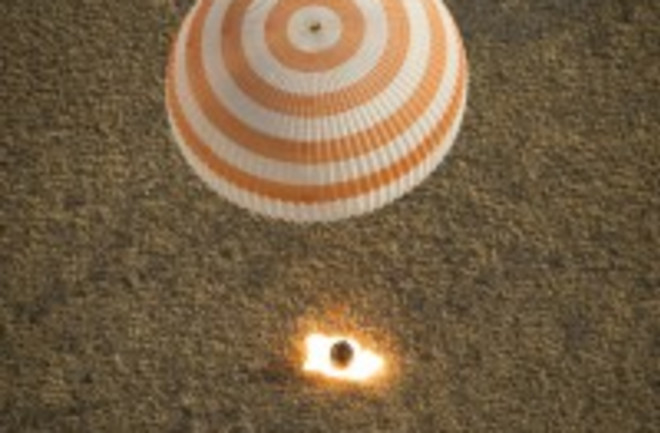 The moment before Soyuz TMA-08 lands from Expedition 36, the retrorockets fire. NASA/Bill Ingalls) When the Soyuz spacecraft returns from the ISS, a parachute slows its fall, but not enough for a safe landing. That's why there are retrorockets on board that fire just moments before touchdown; they slow the spacecraft that extra little bit so the landing is slow and survivable for the crew. It works, but it seems a little counter-intuitive if you think about it. When NASA had capsule-type vehicles in the 1960s -- the same kind it's revisiting now with Orion and SpaceX is using with the Dragon -- the vehicle's splashed down. When NASA landed on land, the shuttle did it on a runway like an airplane. So why exactly did the Soviets adopt this retrofire landing system the Soyuz has been using for more than a half-century? It comes down to geography. So let’s be honest: the Mercury program we all know and love was a crash program, a quick and dirty solution to the sudden need for America to prove its technological dominance by beating the Soviets into orbit. A manned capsule replaced the warhead on a missile, the Redstone and later the Atlas, mimicking the blunt body shape of that warhead. It was a simple shape, which simplified the mission, which was great. NASA was learning about spaceflight as it went along, so simple was good. The Soviet Union adopted a similar approach with the Vostok spacecraft. This was also a blunt design, though a slightly more complicated one. Where the Mercury capsule returned to Earth in the same configuration it had in orbit, Vostok had a detachable conical instrument and engine module that had to be jettisoned during the descent. Once gone, the main crew module was the part that needed to come down safely.

Recovering Gordon Cooper after Gemini 5 splashed down. NASA. When it came to deciding how to land it, splashdowns made sense for NASA… sort of. It might not have been the best from a technical standpoint -- salt water is highly corrosive and water landings open the door (literally) for the possibility of drowning, as we know from Gus Grissom's Liberty Bell 7 mission. But for all the dangers, splashdowns were simple and quick to develop. The ocean is a nice, big, yielding target; all the spacecraft needed was a parachute to slow it down for a survivable soft landing. Consider that America has oceans on both sides of the country and a massive Navy with ships, planes, helicopters, and men over all international waters, so recovering the crew was relatively easy (albeit expensive and manpower-intensive). Also take into consideration the Cape Canaveral launch site. Launching from a near-equatorial site heading east takes advantage of the Earth's rotation to help a payload reach orbit. This meant that missions launched safely over unpopulated ocean and gave astronauts a safe splashdown area in the event of a launch abort. And it's pretty temperate. Crews could safely open the hatch and leave the spacecraft after landing if they needed to. The Soviet Union didn’t have the same natural resources to exploit. The launch site at the Baikonur Cosmodrome (near the city of Tyuratam) is in Kazakhstan. The site was leased to Russia by the Kazakh government in the 1950s in an attempt by the Soviets to establish the southernmost launch site possible. But it’s pretty far north; it’s roughly the same latitude as Portland, Maine (which is a lovely state and well worth a visit).

This gives a sense of available landing areas. The blue is water. The light blue around the US is American waters. The light red around Russia is Russian waters, which are very far north! The blue lines show the relative latitudes of the launch sites, which are marked with yellow dots. You can see how landlocked Baikonur really is. (I made this map for my old blog years ago.) And Baikonur is essentially land locked. The Caspian Sea is the nearest body of water sitting west and slightly south of the launch site. The only open Russian waters are much further north in the Arctic Circle — the Barents Sea, The Laptev Sea, and the East Siberian Sea. None of these are overly hospitable places for a splashdown. If water got into the spacecraft at all, the cosmonauts would freeze, and the wouldn't have the option of opening the hatch after landing if they needed to. It could also be harder to reach a crew if there was ice in the water. Hospitable waters at more southernly latitudes would mean working in shared international waters, which was not exactly something the Soviets were keen on doing during in the Cold War. What the Soviets did have access to was land, lots and lots of open land with few residents. Figuring out a way to land on land was pretty much the easier of two difficult options. Though as we know it wasn’t *really* the simplest. Remember that spherical crew module that landed alone? A parachute wasn't enough to slow it for a safe landing, and retrorockets weren't part of the original design. The solution was to jettison the cosmonaut. He ejected at about 23,000 feet, relying on a personal parachute for his safe return while the capsule landed separately with its own parachute. It might have been a little awkward, but it worked! This is a very condensed version of one of my first ever blogs posts! If you want the longer version it's right here. There are a couple of other related blog posts about splashdowns

and various landing systems on the old blog, too.