Why Bacteria, But Not Humans, Can Live on Caffeine

It's all in the rings. 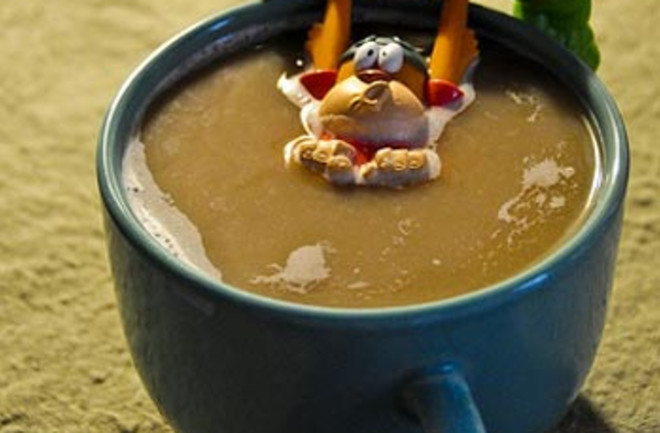 When scientists discovered a new bacterium that can live on caffeine last month, it sparked many tongue-in-cheek headlines and ledes. "Bacteria survives on caffeine (like me)." "If you can’t live without a cup of coffee…" "Think you live on caffeine?" But after everyone had a good laugh about the extent to which modern existence is dependent on coffee and run through a few specifics about the bacterium, there was still one question left unanswered. When you get down to it, why can’t humans live on caffeine?

As any coffee addict can attest, we get a kick out of it because caffeine locks the central nervous system into delicious, delicious overdrive. When the molecule seeps into the brain and interferes with neurotransmitters, blood pressure rises, neurons work faster, and adrenaline production jumps.

But compare the calorie count for a black coffee with a latte and it’s obvious that humans don’t get energy, in the scientific sense, from caffeine. This doesn’t seem to be a problem for the new bacterium, Pseudomonas putida CBB5, and several related bacteria that scientists have known about for years, who get all the calories they need from it. (We, and the caffeine-loving bacterium, need nutrients like vitamins and minerals as well. But those are for use in biological reactions rather than as an energy source. They are the motor oil, not the gasoline.) Caffeine seems at first glance like a pretty average molecule—lots of carbon, nitrogen, and oxygen. So why can’t we get literal energy from it, as well as a high?

One answer to this question is: Why would we get energy from it? Though we don’t think about it often, most of the molecules in nature are inaccessible to human digestion. Humans are fairly limited in terms of what the body can digest: lipids, carbohydrates, and proteins are our only sources of calories. A lot of the molecules we eat, we don’t use.

Take the example of cellulose. Cellulose is the primary component of plant cell walls and accounts for the fiber in fruits and vegetables. Humans can’t break cellulose down, so it passes through the body basically intact and we’re none the energy richer. But cows, rabbits, and other grass-munching creatures are able to extract calories from it, because they have bacteria living in their guts that produce enzymes that strip cellulose down to its component elements. Specifically, they get a handle on crucial chemical bonds (known as 1,4-beta-D-glycosidic linkages) whose removal makes the rest of the molecule easy pickings.

That’s similar to what P. putida CBB5 does. As Ryan Summers, the University of Iowa doctoral candidate who presented the research on the bacterium, points out, it possesses several enzymes that do things to caffeine that we can’t. Specifically, it breaks down the two carbon and nitrogen rings at the molecule’s core.

Human liver enzymes, which have the task of processing caffeine and other drugs, can get part of the way there. They can remove the CH3 groups stuck to the rings, just as bacterial enzymes do. But after that, while humans show the caffeine derivatives, the most simple of which is known as xanthine, the door, the bacteria hang onto them, chopping down the rings to their component elements and harvesting energy.

The specific reason caffeine isn’t an energy source for us, thus, is that we don’t have the gear to digest derivatives further. We can do other things with them—usually, we pop an oxygen on xanthine to make uric acid and pee it out—but taking them apart isn’t possible.

That doesn’t mean “living on caffeine” need remain a forever figure of speech, however. As Mani Subramanian, Summers’s adviser, points out, 90% of the cells in our body are bacterial, and research into the human microbiome, our total complement of bacteria, has revealed that we are veritable rainforests when it comes to bacterial diversity. “It's entirely possible that there are some bacteria in our digestive system or elsewhere that can degrade caffeine and derive energy,” he writes. “Once the entire human microbiome is sequenced, we may be able to determine if there is a caffeine-degrader inside of us.”

For the speculative thinker, there are only a few jumps from there to the idea that such caffeine-eating bacteria could let us have some of that energy, or otherwise make xanthine easier to digest—but that’s a story for another day. For now, sip your coffee, and be satisfied.