Why Aren't All Members of a Species the Same? Exploring the Pangenome 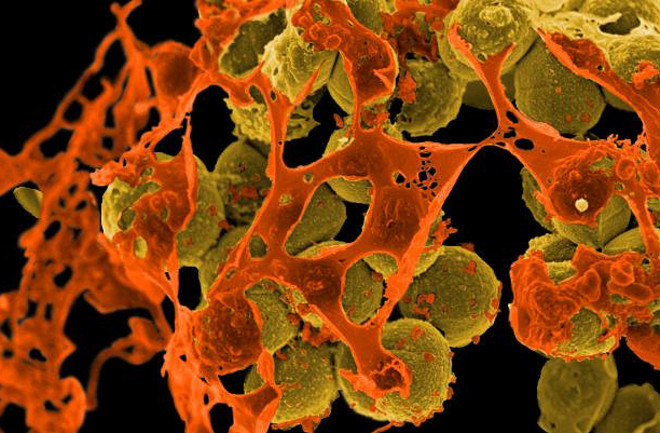 Individual microbes of the same species often have a lot of different genes. But why? (Image: NIAID) Prochlorococcus marinus are diminutive organisms. At less than a micrometer across, these photosynthesizing microbes may be small, but they’re plentiful – by many accounts one of the most abundant species on the planet. But that’s not quite the full story: like any other member of the same species, no two P. marinus individuals are genetically identical. What’s remarkable is how different they may be. Take two different P. marinus cells from different parts of the ocean, sequence their genomes, and lay them side-by-side. Of the approximately 1900 genes that each genome contains, only about 62% are likely to be shared. What makes these two individuals members of the same species is the similarity of one particular gene – the 16S rRNA gene – but the rest of the genome isn’t so consistent. This phenomenon is pervasive in the microbial world: members of the same species have a “core genome” that is invariably present. These are typically the genes that distinguish the species’ energy-generating and carbon-assimilating metabolism, such as photosynthetic pathways in P. marinus. But they also have an “accessory genome”, a collection of genes that is – by definition – different between distinct cells and could confer useful, condition-specific capabilities. Combine all of the accessory genes and the core genes and you’ve assembled the “pangenome”: the full set of genes that could potentially be in an individual. Pangenomes allow species to sample from a large grab bag of genes – they’re a “diversity generator” which, across the microbial world, has put trillions of different genes into circulation. But evolutionary biologists have struggled to explain the concept of the pangenome. If a newly acquired gene is good, then you’d expect it to be “fixed” into the core genome, allowing all members of the species to gain an advantage over competitors. If the gene is not good – bad or merely neutral – then it should be eliminated. Any gene that doesn’t contribute to an organism’s fitness is subject to energetic cost cutting – it’s simply not worth replicating a freeloading gene across generations if it’s not helpful. So why do pangenomes exist? In a new paper, James McInerney – a biologist at the University of Manchester in the UK – thinks he has an answer. The new genes are generally good, he argues, but before a new gene gets a chance to be “fixed” into the full population, the fortunate host cell migrates into a new niche. In some cases, the fate of a newly acquired gene may be dependent upon the new environment a microbe finds itself in. If it’s useful – say, an antibiotic resistence gene in a neighborhood sizzling with biochemical warfare – it gets to stay. If not, it goes. McInerney’s riff on the adaptive evolutionary model leads to some testable predictions. For example, organisms that sample a wider range of habitats, like E. coli, in billions of animal guts, should have large pangenomes. (It does, with 3,188 core genes and more than 90,000 accessory genes.) You’d also expect to see a kind of “distance-decay” function of accessory genome similarity, with individuals in the same habitat sharing much of their accessory genome and those in different niches sharing others. With this theoretical underpinning, McInerney and his coauthors “present our predicitons for future empirical observaitons.” Challenge issued, evolutionary biologists may be on the cusp of answering one of ecology’s biggest questions.