White Spots, Lone Mountains, and Other Funny Business on Ceres 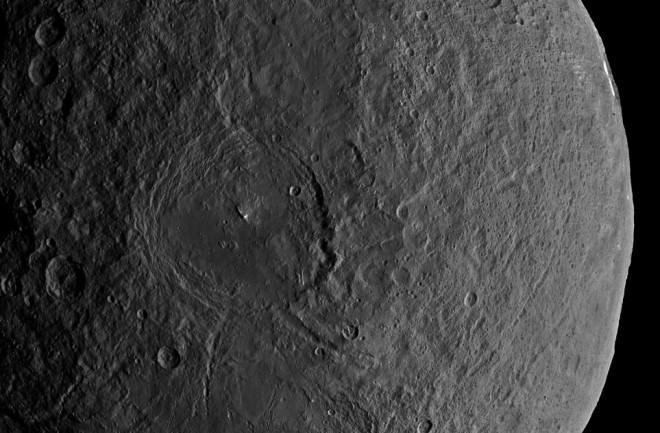 Ceres is a wonderland of puzzles, including the white spots (far right) and enigmatic ridges, crater chains, and flows. (Credit: NASA/JPL/UCLA/MPS/DLR/IDA; processing Elisabetta Bonora & Marco Faccin) "The most exciting phrase to hear in science, the one that heralds new discoveries, is not 'Eureka' but 'That’s funny...'" That quote, delivered by the brilliant science writer Isaac Asimov, keeps popping into my head as I look at the remarkable new images of Ceres. NASA's Dawn spacecraft has been orbiting the dwarf planet since March 6, scrutinizing a landscape that is not quite like anything humans have ever seen before. One detail on Ceres jumped out almost immediately: a bizarre white spot, drastically brighter than its drab surroundings. As Dawn got closer, the probe's camera showed that the white spot is actually a patch of at least eight smaller white areas; there are also smaller white spots and extended light-ish splotches scattered across Ceres's 950-kilometer-wide 590-mile wide globe. What are they? No idea, except not alien landing lights (they don't show up in the dark). Subsequent images revealed a solitary, 3-mile-high mountain; long ridges and apparent streamers of impact debris; giant frozen surface flows; and craters with unusual distorted, vaguely hexagonal shapes. The initial scientific reaction to these Ceres images boils down to three simple words that Asimov would well recognize: "That looks funny." It makes sense that Ceres does not quite fit into any familiar categories. It is a type of object that has never before been explored: considerably larger than any other asteroid but far smaller than any of the classical planets, not rocky like Mars but not fully icy like the moons of Jupiter. Ceres is an in-betweener, a missing link left over from the solar system's early days. Most likely it is a surviving protoplanet, the kind of object that was mostly swept up and absorbed into larger worlds. Somehow Ceres survived intact. Now we get to study it, and take a trip 4.6 billion years into the past, when Earth was growing into its modern self by snacking on objects like Ceres. For help in interpreting this thrilling and baffling world, I called on Andy Rivkin of Johns Hopkins University's Applied Physics Lab. Rivkin studies the surface properties of asteroids, and has a wide-ranging curiosity. He wants me to warn you that a) he is not a member of the Dawn team and b) he's an astronomer, not a planetary geologist. Consider yourself warned. But Rivikin is also an able tour guide to the asteroids, with a keen interest in Ceres, so I asked him to share some thoughts about the most interesting--or should I say, "funny"--Dawn has observed so far.

Lonely mountain does not appear to be associated with any nearby impact or eruptive feature. It's also the only one of its kind on Ceres. (Credit: NASA/JPL/UCLA/MPS/DLR/IDA) Let's start with the basics. What is Ceres composed of? What kind of landscape are we looking at here?Rivkin: Even before Dawn, we knew Ceres’ size and mass well enough to get a pretty good density, which tells us it is about 25% water or ice. That’s consistent with the amount of water we find in carbonaceous chondrites [a class of carbon-rich meteorites]. Hubble observations gave us a precise shape; that, combined with the measured density and rotation period, suggested that Ceres has an ice shell over a rock core. Thermal models predict that a region near Ceres’ surface remains undifferentiated [water and rock never got separated out by density]; it never got hot enough to melt because it was exposed to space. Ice is not stable at the surface of Ceres, however, so the ice above the crust would sublimate [evaporate directly to space], leaving behind whatever other material is being carried in the ice. The ice will retreat until it’s some tens to hundreds of meters below the surface, where it’s stable. So, what’s at the actual surface is thought to be a lag deposit, but how thick it is, and whether there’s ice or original crust or both beneath that lag deposit--and whether that differs from place to place on Ceres--is all to be determined. We don’t know what to expect.

Now I'd like to ask about some of the specific types of formations. What do you make of the long, straight ridges?

Rivkin: There was some expectation of tectonic features on Ceres. The consensus that it has an icy mantle. Water ice changes volume as it cools, which leads naturally to ridges. There are lots of other ways to get ridges, though, as we see on Vesta; fractures due to large impacts can do it, for instance.

A lot of the craters on Ceres are not round, not even close. What's up with that?

Rivkin: The subsurface ice shell we believe is present on Ceres is relatively warm as ice goes, so relaxation [the softening of surface features as the ice slowly flows] was expected. The non-circular craters are likely a result of the ridges or troughs that I just mentioned, or at least cracks that are related to those. Local tectonics change the shape of craters. This sort of phenomenon is seen on Earth also, where Meteor Crater in Arizona is decidedly square-ish.What about the formations that look like lines of pits, or maybe strings of small craters?Rivkin: Debris chains could be secondary craters from larger impacts. Alternately, surface draining down into a fracture could give the appearance of regularly-spaced pits, and would fit with some of the other features we’re seeing.

White splotch on Ceres is spread out, unlike the concentrated white spots. Perhaps we are seeing different aspects of the dwarf planet's interior exposed. Note the irregular crater shapes. (Credit: NASA/JPL/UCLA/MPS/DLR/IDA) Some of the craters look like they were flooded, or maybe that they melted underlying ice. Does that make sense?Rivkin: There are some smooth-looking areas along with the rough ones. It’s tempting to argue that the flatter areas may be closer to the ice table inside Ceres. The flatter areas seem to be lower in elevation, which is consistent with that, too. But that’s complete speculation.

Let's talk about the second-weirdest thing on Ceres--the isolated peak, which I am unilaterally calling Mount Piazzi in honor of the man who discovered Ceres.

Rivkin: It’s funny you’re calling this Mount Piazzi. I referred to it as Delirum Tholus (Crazy Hill), and someone on twitter suggested Ergotus Tholus after the mold that grows on cereal and makes you hallucinate. I'm at something of a loss on this one. It appears like one side is brighter than the other, but I’m not sure if that’s an albedo [reflectivity] difference or a lighting difference. It would have been super-exciting if the shaded side be brighter, since that would be consistent with frost, but I don't think that’s the case. Last but certainly not least, tell me your thoughts about the white spots.Rivkin: We have little data from Dawn's spectrometer at this point, but it should be able to establish whether or not there’s a lot of ice in these spots or not. Different white spots seem to have different temperature contrasts relative to the background, suggesting that different bright spots may have different causes. That's an important point: There is more than one possible high-albedo material we might find on Ceres, including ice. Depending on the thickness of any lag deposit (and what’s underneath it), there may be different bright material exposed in different places. Any ice on the surface would sublime away quickly, geologically speaking. A sufficiently reflective patch of ice might be cold enough to survive for a while, but the general mixing you expect on an asteroid like Ceres seems like it would inevitably mix dark material into the ice and warm things up. I don't think cryovolcanism [ice eruptions] would be necessary to expose young ice; all you'd need are impacts big enough to get through the lag deposit. Having said that, observations with the Herschel telescope show water coming off of Ceres, so there's something going on. It could be sublimation of ice exposed by impacts, or "plumes" and some kind of active process. My money is on the former, because the thermal models predict that there's little or no liquid water left at the base of the ice shell.

The white spots of Ceres. Excavated ice? Cryovolcanoes? Salt deposits? UFO landing strips? Nobody knows, but probably not the last one. (Credit: NASA/JPL/UCLA/MPS/DLR/IDA) If the spots aren't ice, what else could they be? Salt flats?Rivkin: Salts would likely darken with exposure to ultraviolet and the solar wind given what (few) studies and experiments exist. You'd need to expose fresh salt somehow, but then you'd expect that to look like fresh craters on the moon, with bright ejecta instead of just bright spots. As with a lot of things on Ceres, we seem to be missing something. I don't know if there will just be one "aha" moment that makes everything fit. How will we figure it out?Rivkin: There are several ways the Dawn team might be able to distinguish between different bright materials. Spectroscopy is an obvious way, but surface textures and morphology are other possibilities. Ice will sublime away relatively quickly, but other high-albedo materials like salts will presumably just darken in place. Looking at the distribution of bright material with latitude and temperature should also help. But I'm also wondering when I can start openly advocating for a Ceres rover.