Which Galaxies are Best Suited for the Evolution of Alien Life? 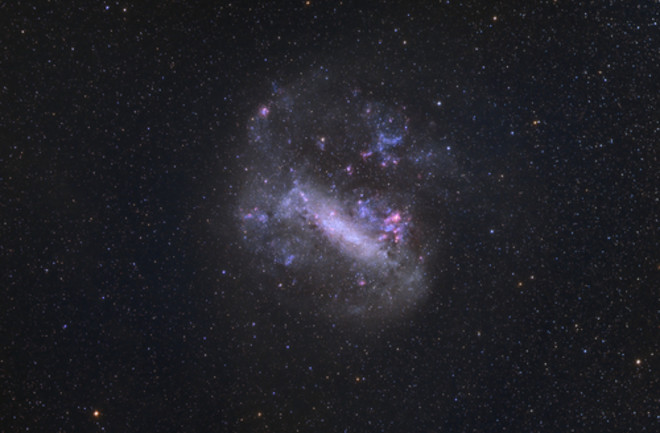 The Large Magellanic Cloud, a satellite of our Milky Way, may be well-suited for the evolution of life. (Credit: John A Davis/Shutterstock)

Where in the universe can life evolve? When scientists discuss this question, they’re usually talking about what kinds of planets might support life. But some researchers are thinking bigger.

In recent years, astronomers have been investigating whether some types of galaxies are more hospitable to life than others. Unsurprisingly, most researchers think large spiral galaxies like our own Milky Way might be good candidates for life. But in a recent paper, one research team proposes that some dwarf galaxies may be another category of habitable galaxies. Though studies of galactic habitability are “in their infancy,” as the study’s authors note, this research poses fundamental questions about how life in the universe comes to be.

“It’s almost [a] completely new field, terra incognita, so to speak,” study author Milan Ćirković of the Astronomical Observatory of Belgrade said via email. “Such things are always exciting.”

Large spiral galaxies are one galaxy type that researchers think may be good for developing life. Our own planet is the only known example of life arising in such a galaxy, but spirals pack relatively high amounts of the heavy elements needed to form rocky planets.

However, life in a spiral galaxy can have its downsides, too. These galaxies form new stars more actively and have more dangerous cosmic events, like supernova explosions, compared to other galaxies. Those kinds of disasters can spew harmful radiation into nearby space and potentially destroy planets’ biospheres.

Ćirković and his team tested this idea by studying more than 100,000 galaxies that other astronomers created in simulations. They found that small galaxies, or dwarf galaxies, with relatively high amounts of heavy elements may be promising candidates for habitability.

For example, the Large Magellanic Cloud, a dwarf galaxy orbiting the Milky Way, is one example of a high-metallicity dwarf galaxy. These galaxies have plenty of heavy elements for creating rocky planets and tend to be calmer environments with fewer explosions to disrupt the formation of life.

“It’s a kind of ‘sweet spot’ in the galactic zoo of all the different galaxies,” Ćirković wrote.

The researchers published their paper in the journal Monthly Notices of the Royal Astronomical Society. A version of the paper is accessible on the pre-print site arxiv.org.