When the Cosmos Started To Cook

The birth of chemistry transformed the universe from gassy chaos to starry order — and it all happened out of sight. 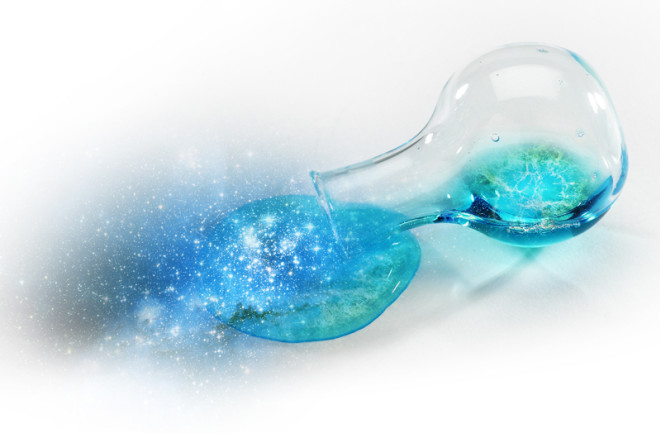 Here’s a bit of trivia to stump even your most science-savvy friends: What is the strongest possible acid, so reactive you cannot even measure it on the pH scale? Or try this one: What is the very first molecule that formed in the universe, before water, before even molecular hydrogen? While your victim is scouring his or her brain, you could offer a taunting clue: The two compounds are one and the same.

The unexpected answer is … helium hydride, HeH+. Jerome Loreau of the Free University of Brussels calls it the mystery molecule (or rather the “mystery ion,” since it carries an electric charge), and for good reason. Your chemistry teacher probably taught you that helium, a noble gas, never reacts with anything, but that turns out to be entirely untrue — at least, under certain highly exotic conditions. Helium hydride is so obscure that many astronomers have never heard of it, even though it marked a key turning point in the evolution of the universe. It was step one in the birth of chemistry and the emergence of stars, planets and life itself.

Which brings me to the last and most mysterious thing about helium hydride. “We can’t observe it,” Loreau says sheepishly. “It just seems to be somehow invisible in space.”

It’s not just helium hydride that researchers can’t see; the other first-generation molecules are invisible, too. The missing pieces make up an entire torn-out chapter of cosmic history, an important era known, fittingly, as the Dark Ages.

At first, immediately after the Big Bang, space was a hot tangle of intertwined matter and radiation. As the universe expanded, it steadily cooled. Once it reached a temperature of about 4000 kelvins, 380,000 years after the Big Bang, protons could combine with electrons to form hydrogen atoms. Unlike the particle soup that came before, hydrogen is transparent, allowing radiation to start streaming freely through the now dark universe.

The radiation from that time is still easily detectable today as the cosmic microwave background, the all-pervasive glow that provided clinching evidence in the 1960s for the Big Bang. The matter, on the other hand, disappeared from view. The next thing astronomers can see is a population of rather well-developed proto-galaxies a few hundred million years later.

What happened during the long stretch in between? Right. Dark Ages.

Even though we cannot see the Dark Ages, we have some idea what was happening then. Models of the Big Bang give a precise account of the initial makeup of the cosmos: hydrogen, helium, a little deuterium (a heavy form of hydrogen) and trace amounts of lithium. That’s it. As for what they were doing, once the universe was cool enough to form hydrogen atoms, it was also cool enough for those elements to start interacting with each other and combining into molecules. In other words, the day the cosmos went dark is also the day chemistry began.

“The chemistry is relatively simple. It’s a very clean chemical laboratory,” says Phillip Stancil of the University of Georgia. Like Loreau in Brussels, Stancil has studied helium hydride, but he looks more broadly at the evolving mix of compounds in the early universe. (The two also studied with Alex Dalgarno at Harvard, a pioneer in the field; it’s just a hardy few willing to devote their careers to things that cannot be observed.)

This work is how we know that helium hydride was the first atomic pairing in the universe, an electrical attraction between a helium atom and a proton, the nucleus of a hydrogen atom. The presence of that naked proton is what makes helium hydride such a powerful acid, ready to combine with anything that crosses its path. Once helium hydride appeared, it triggered the formation of the first molecular hydrogen — two hydrogen atoms bonded together. Every other possible atomic combination quickly followed, including helium-lithium and H3+, a three-atom hydrogen molecule, both of which are far too unstable to exist naturally on Earth.  Seeing Stars

The emergence of chemistry had a transformative effect on the universe because of a peculiar property of atomic hydrogen: If you take a big cloud of hydrogen atoms and let it collapse, it gets hotter and hotter until all the bound-up energy keeps it from shrinking any further. You end up with just a smaller cloud, nothing with a defined structure. A universe made only of atomic hydrogen is a boring universe.

With helium hydride, everything began to change. From there came the first hydrogen molecules, and with molecular hydrogen, the modern universe was born. “Molecules give a mechanism for removing the energy during the collapse,” Stancil explains. The molecules can emit radiation away, causing the cloud to cool and keep collapsing. Hydrogen molecules aren’t the best coolant, but they are good enough to enable giant gas clouds, millions of times as massive as the sun, to fall in on themselves. Those clouds became the first stars. After hundreds of thousands of years — maybe even a million — the darkness began to dissipate.

The JWST observatory may reveal some of the universe's oldest molecules. NASA/MSFC/David Higginbotham/Emmett Given

The first stars were oversize, unstable beasts that rapidly forged heavier elements in their cores and then exploded as brilliant supernovas. Carbon, oxygen and silicon from the explosions then spread into the surrounding gas, ushering in the second phase of cosmic chemistry. Two new compounds, water and carbon monoxide, allowed gas clouds to cool much more efficiently, forming vast numbers of smaller stars. Newly formed dust particles created solid surfaces that facilitated complex chemical reactions. An acidic jumble of hydrogen and helium gave way to a universe of shimmering galaxies.

Something even more remarkable may have happened during that era of first light. Avi Loeb at Harvard University points out that the overall temperature of space was around 300 kelvins (about 80 degrees Fahrenheit — room temperature, basically), meaning that the whole universe was a habitable zone.

Meanwhile, all those exploding stars were pumping out carbon, oxygen, nitrogen, phosphorus … the elements of biology. Loeb pictures each exploding star as an incubator, creating a bubble of vital elements around it, and wonders if the end of the Dark Ages was also the moment when the universe became alive. Hunting the Dawn Molecules

So much rich history hidden from human eyes! Fortunately, some traces of the primordial compounds persisted past the Dark Ages. Chemical calculations show that helium hydride should be visible in clouds around distant galaxies and supernovas, or even in modern planetary nebulas (shells of gas expelled by aged, sunlike stars). Efforts to find it have come up empty, however.

“It’s not observed, but that doesn’t mean it’s not there,” Stancil says. “It’s just below detection limit.” He notes that astronomers didn’t spot the chemically important molecule H3+ until the 1990s “because we just didn’t know where to look.”

As for helium hydride, he allows himself a flicker of optimism about two new observatories coming later this decade: ALMA, a radio telescope array in Chile, and the James Webb Space Telescope, a giant successor to Hubble due to launch in a few years. They won’t be sensitive enough to see an individual first-generation star, but a whole cluster of such stars might be just bright enough to illuminate the early molecules and finally make them visible.

Stancil seems unperturbed by the long wait for confirmation: “We have a lot more work to do in our models. It may turn out that we’re really ready with the models by the time the Webb telescope is ready to start observing.”

Loreau exudes a similar zen calm. “There are not a lot of people who are working on helium hydride,” he says, “but I’m hopeful that someone will continue to try and find it.” Maybe then it will be a trivia question no more.