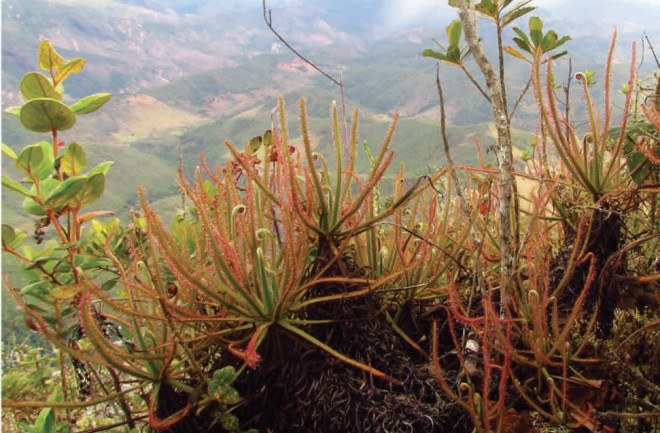 A new species of carnivorous sundew, Drosera magnifica, which scientists discovered while surfing Facebook. Photo by Fernando Rivadavia "It was just another normal day on Facebook," claims Paulo Gonella, a PhD student at the Universidade de São Paulo in Brazil. "I was scrolling down my newsfeed when I came across a post by a friend. He was sharing a photo originally posted by Reginaldo Vasconcelos, a plant enthusiast from Governador Valadares, showing some plants in their natural habitat." But as Paulo looked at the low-resolution image, some of the plants jumped out at him. They looked like sundews — in the genus Drosera — but unlike any of the thirty species that are found in Brazil. "The plants in the photo looked much larger and had very distinctive leaf and flower characteristics when compared to all the other Drosera I know," Paulo recalls. "I immediately showed this photo to Fernando Rivadavia, who also studies this group of plants, and he was astonished as well." Though they weren't sure, Paulo and Fernando had just done something no one else had ever done: discovered a new species of plant on Facebook.

A leaf of Drosera capensis curls to encircle its insect victim trapped by the glue-like droplets of mucilage visible on the tips of each stalk protruding from the leaf. Photo by Noah Elhardt The genus Drosera is the largest carnivorous plant genus on Earth, boasting about 250 species. These vicious flora, commonly referred to as sundews, can be found on every continent except Antarctica, often growing in places where other plants struggle due to their meaty diet. While most plants obtain all the minerals they need from the soil they grow in, Drosera species supplement what they pull from the ground with tasty insects which they catch using a thick, gluey substance produced by special stalks on their leaves. Recently, plant scientists have been reviewing and revising this genus. In Brazil, there are only 14 species listed on the online database “Lista da Flora do Brasil", but scientists have described about 30 species from the country. Of course, Reginaldo Vasconcelos wasn't thinking about sundew taxonomy when he made this Facebook post:

His photos, including the unnamed Drosera, were shared by a few of his friends, one of whom was also friends with Paulo. Paulo then showed the picture to Fernando, and the pair contacted Reginaldo to ask more about the plant. Reginaldo was able to provide more pictures and where he shot them, and helped the pair get in touch with locals who guided them to the summit of the mountain he had been exploring, Pico do Padre Ângelo. Less than three months after they first saw the picture on Facebook, Paulo and Fernando were on their way to see what they suspected was a new species with their own eyes. Getting to it, however, would prove more difficult than they anticipated. "It was mid rainy season and the dirt roads leading to the region were especially slippery. We finally had to give up driving to the mountain when we reached a steep slope and instead of going uphill, our car was going downhill!" Paulo explains. "We walked the rest of the way under rain and over a muddy road to finally reach the mountain base. From this point, it took 4 hours to reach the top, so we arrived there quite late. We quickly collected all information we needed, made observations, collected the specimens for herbarium specimens and took some photos, as we needed to return before sunset." Finding the plant was key, because although the photo suggested a new species, without actual specimens and a detailed description, no one could be sure. "We also needed to confirm other important data about the species, such as population size and potential threats to its habitat to evaluate the conservation status," says Paulo. Several features set the new plant — Drosera magnifica — apart from its closest relatives. It has a higher number of leaves per rosette, for example, and they're a little broader. The team decided upon the species name 'magnifica' because of the plant's "magnificent appearance." It's the largest sundew in the New World, and until its description was published July 24, 2015 in Phytotaxa, it was completely unknown to science.

Map of D. magnifica distribution in Brazil. Figure 1 from Gonella et al. 2015 The team searched the mountain, but they only found a few populations of D. magnifica. Most of the plants were at a single site on the south slope of the summit of Pico do Padre Ângelo between 1500 and 1530 m in elevation. As far as habitats go, it's not the most plant friendly; Paulo and Fernando found these robust sundews in loose, sandy soil or even growing out of cracks in the mountain's sandstone surface. The site is wetter than most around because of the shape of the mountain and wind patterns, which might be why D. magnifica does so well there. Two nearby mountaintops were searched a few months later, but they were drier and barren of the new species. So D. magnifica is considered a microendemic and critically endangered due to the potential for extinction from habitat loss. This magnificent plant is the first new species of plant discovered on Facebook, following on the heels of a new species of lacewing that was described after a photo of it was posted to the picture sharing site Flickr. Social media platforms are often maligned, thought of as frivolous networks that cater to narcissists and teenagers (but I repeat myself). Paulo, however, is one of a growing number of scientists who sees these sites a little differently. "As a botanist, I see Facebook as an important tool," says Paulo. "It allows me to be in touch with not only other fellow botanists, but also plant enthusiasts from all over the globe. I participate in a few plant identification groups, where people post photos of the plants they see in nature, and from these photographs, it is not rare for specialists to discover new regional records, new populations of rare plants and, now, new species." Citation: Gonella, P. M., Rivadavia, F., & Fleischmann, A. (2015). Drosera magnifica (Droseraceae): the largest New World sundew, discovered on Facebook. Phytotaxa, 220(3), 257-267. DOI: 10.11646/phytotaxa.220.3.4