What’s Hotter Than the Surface of the Sun? The Solar Corona 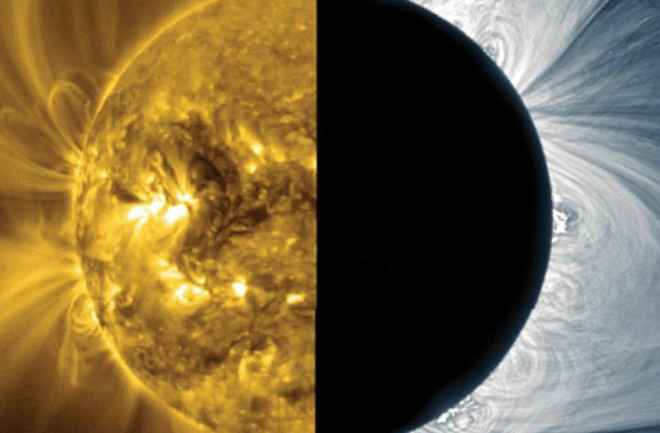 There are two ways to see the sun’s corona: Send up a spacecraft or wait for a total solar eclipse. On the left, the sun’s wispy atmosphere glows with ultraviolet light, captured by the European Space Agency’s PROBA2 satellite. Loops and arcs of plasma follow magnetic field lines coming from the sun. On the right, light scattering off particles in the corona becomes visible during the 2017 total solar eclipse that traversed the United States. (Credit: S.R. Cranmer & A.R. Winebarger / AR Astronomy & Astrophysics 2019. Original from M. Druckmüller et al. / Contrib Astron Obs S 2006)

In the final moments before a total solar eclipse, the temperature drops, birds and insects sing, and the ambient light becomes otherworldly. Daytime morphs into a 360-degree dusk, and where the sun once hung a black hole punches through the sky, wreathed by a white ethereal glow.

That glow is the solar corona, the sun’s tenuous upper atmosphere of ionized gas. Composed mostly of electrons and the bare nuclei of hydrogen and helium atoms, it is the launchpad for the solar wind — the stream of charged particles that escape the corona and wash over the planets, eventually petering out at the threshold to interstellar space. Events in the corona affect all of the sun’s worlds, including Earth and the technological society that humans have built upon it.

And yet, despite roughly 80 years of study, much about the corona remains a mystery. The solar wind doesn’t slow down as it leaves the sun — it speeds up. Some particles shoot out of the corona with so much energy that they approach the speed of light. And perhaps most baffling of all, the corona is hundreds of times hotter than the sun’s surface.

Figuring out how this excess energy gets into the corona isn’t just an academic exercise. That energy often affects Earth, with occasionally disastrous results. The largest flares from the corona can wreak havoc with power grids, wireless communication and satellites.

“We’re very connected to these problems, even though it’s not necessarily something that’s going to change your life today,” says Amy Winebarger, an astrophysicist at NASA’s Marshall Space Flight Center in Huntsville, Ala. “As we become more of a space-based culture, understanding the sun and how it interacts with the Earth is even more important.”

While society-disrupting flares are an extreme example, researchers hope that if they can better understand how energy gets into the corona, then we might be able to predict dangerous eruptions with enough warning to protect vital equipment.

Winebarger, along with Steven Cranmer at the University of Colorado, summarized what we currently know about the corona in the 2019 Annual Review of Astronomy and Astrophysics.

Studying the corona is not easy. It emits most of its light at high-energy ultraviolet and X-ray wavelengths, which are blocked by Earth’s atmosphere. What little visible sunlight the corona reflects is vastly outshone by the sun’s surface. To see the corona, you need an eclipse or a telescope equipped with a sun-blocking disk.

It’s thanks to eclipses, in fact, that people have known since antiquity that a white glow wreathed the sun. But progress in understanding had to wait for researchers to apply lessons from quantum mechanics in the late 1930s, to correctly interpret the visible light seen from the ground. Another boost arrived with the invention of powerful rockets in the early 1940s that could lob cameras above Earth’s atmosphere.

Even those early observations hinted at something very strange about the corona. The temperature in the corona is a blistering million or so degrees Celsius. But the temperature at the sun’s surface — the source of that energy — is a relatively balmy 5,500 degrees.

“It’s just weird,” says Winebarger. She likens it to walking away from a campfire and feeling colder and colder until suddenly getting very hot. “You’d have to have something, a special tube maybe, that would transport energy from your fire.”

That tube, researchers suspect, is the sun’s magnetic field. But physicists can’t agree on exactly how that might work. One theory puts the blame on nanoflares, a proposed fusillade of tiny explosions triggered by knotted-up magnetic field lines explosively untangling themselves. Another idea is that waves propagating along magnetic field lines shuttle energy from the sun’s surface to the corona.

Both ideas are phenomenally difficult to test. Computer simulations and calculations suggest that whatever mechanisms drive energy into the corona likely do so on scales that are too small and too fast to see from afar. Ground truth will probably have to come from a spacecraft snuggled up close to the sun. That’s where NASA’s Parker Solar Probe comes in.

Parker launched in 2018 on a seven-year mission to repeatedly dive through the corona. With every orbit, a gravitational nudge from Venus inches the spacecraft ever closer to the sun. The probe will eventually settle into an orbit just over 6 million kilometers from the sun’s surface — seven times closer than any spacecraft before.

At that distance, the sun-facing side of the spacecraft will get roasted to over 1,300 degrees Celsius, its suite of instruments protected by an 11-centimeter-thick carbon-composite shield. (Though the corona has a very high temperature, its particles are relatively sparse — this low density keeps the craft from getting as hot at the corona itself. See why here.)

From its unique vantage point deep inside the corona, Parker is already snapping pictures, measuring electromagnetic fields and counting particles.

With data from the first two orbits in hand — in which Parker flew just 24 million kilometers from the sun — the science team is preparing to publish initial results in a handful of papers this fall. Several dozen more will follow in January. While the team remains tight-lipped about what the spacecraft has seen, their excitement is palpable.

“We’re seeing phenomena that we never even imagined we would see,” says project scientist Nour Raouafi.

The sun’s corona gets trapped by magnetic field lines, which are likely responsible for heating the corona to millions of degrees. Far from the sun, some of the corona escapes to become the solar wind, a steady stream of charged particles that washes over all the planets. (Credit: NASA’S Goddard Space Flight Center / Lisa Poje)

Nicola Fox, former project scientist and current head of NASA’s heliophysics division, concurs: “Even just in our first couple of orbits, we have pulled down data that was unexpected, that had features in it that definitely could … pave our way to piecing together the puzzle of the coronal heating.”

In the coming months, Parker will be joined by two other sun-loving projects. Later this year, a new solar telescope in Maui will open for business. The Daniel K. Inouye Solar Telescope will snap images sharp enough to make out details on the surface of the sun about 30 kilometers across — small enough to reveal the building blocks of the magnetic field, says Raouafi.

Then in February, the European Space Agency will launch Solar Orbiter, a mission to soar out of the plane of the solar system and look “down” on the sun. Except for the now-defunct Ulysses probe, which had no camera onboard, no spacecraft has studied the sun from this angle. From high above the solar system, Solar Orbiter could help researchers piece together the three-dimensional structure of features in the corona and solar wind.

With these three missions working together, researchers hope to crack some of the coronal mysteries that could enrich our understanding of the Earth-sun interaction.

As the only star in the universe that we can see up close, the sun can teach scientists about how more distant stars may interact with nearby worlds. Scientists believe that solar winds stripped Mars of its protective atmosphere, and other stars may act likewise. “It’s like having a lab in your backyard,” says Fox.

“This is really the most exciting time to be a solar physicist,” says Raouafi. “I believe the next decade will be revolutionary in terms of understanding how the sun and [its] atmosphere work.”

Christopher Crockett is a freelance science journalist in Arlington, Virginia, focused on all things astronomy, physics and Earth science.