What's Cooking Out There?

Imagine a boiling pot in space. Herman Merte, an engineer at the University of Michigan, has explored this twist on everyday physics during a series of space-shuttle experiments. He filled a test chamber with liquid Freon and heated it to boiling. Last June, Francis Chiaramonte of NASA's Glenn Research Center in Cleveland compiled and released videos of the experiments.

In the virtually gravity-free environment of space, there is no "up," so conventional boiling—bubbles forming at the bottom of the pot, reaching critical size, and rising to the top—cannot occur. Instead, Merte's videos show a single, huge blob of vapor that grows ever larger yet rests listlessly atop the heated surface. This unfamiliar phenomenon could prove a boon for studying what happens when materials transform from liquid to gas. On Earth, bubbles are fast-moving, short-lived—and hard to study. But in space, says Chiaramonte, scientists "can study the one bubble until the cows come home." Follow-up experiments on the International Space Station could lead to more efficient power plants and cooling systems. 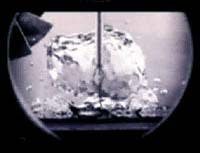