Spitzer will be powered down this week. But what happens to the orbiting telescope now? 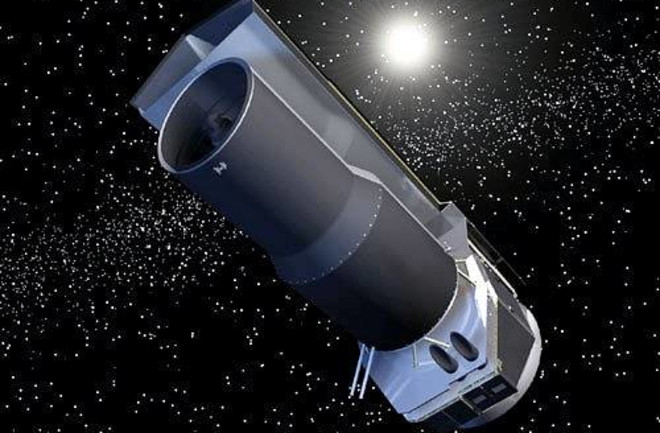 An illustration of the Spitzer Space Telescope. (Credit: NASA)

NASA's Spitzer Space Telescope will be decommissioned on the 30th of January after 16 years of studying exoplanets, our own solar system and far-off galaxies.

Because it sees in infrared, AKA heat, Spitzer's capabilities have been crucial for NASA's observing missions. The instruments have allowed scientists to collect data from areas of our universe normally clouded by interstellar gas and dust.

The official last day of data collection will be on January 28. On the 30th, a command will be sent to Spitzer from ground control, triggering a “safe mode” and turning off systems on the telescope.

But unlike Hubble, which will be de-orbited to burn up in the atmosphere, Spitzer faces a different fate. This is because the telescope has a very particular orbit, trailing about 158 million miles behind the Earth to keep it away from interfering heat.

In about 53 years, Spitzer’s orbit will take it past our planet. But, once the telescope flies by Spaceship Earth, Spitzer will drift off in the opposite direction into the emptiness of space, said Joseph Hunt, the current Mission Manager for Spitzer, in a recent talk.

The telescope has certainly earned its keep over the course of its decade-and-a-half-long mission. Spitzer peered through gas and dust clouds to image some of the most distant galaxies, parsed the chemical makeup of dust clouds in the universe and even found a few planets.

In the last year and a half of Spitzer’s mission, it spent a lot of time studying the universe for exoplanet systems, a mission it wasn’t designed to do. Even so, the telescope discovered a number of exoplanets, including the Trappist-1 system, the closest group of exoplanets to Earth.

So for now, when you look up into the night sky, remember Spitzer is still with us. Well, following us at least.