Snuggle up with a good science book. 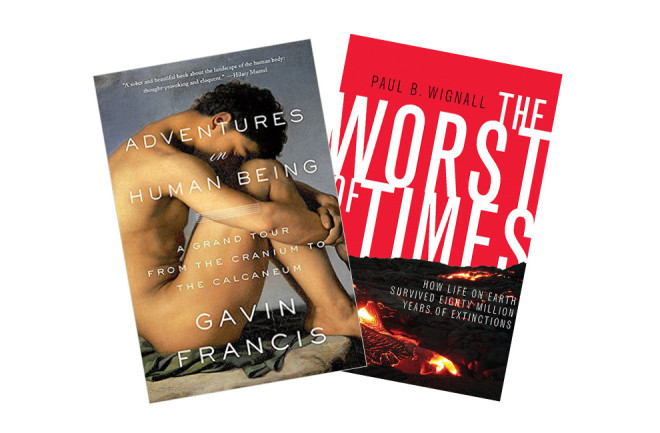 The Worst of Times: How Life on Earth Survived Eighty Million Years of Extinctions

By Paul B. Wignall

About 250 million years ago, things got very bad indeed. The sheer scale of the Permian-Triassic mass extinction boggles the mind: More than 90 percent of life on Earth was wiped out. And yet, the event set the stage for an explosion of new species. In this scholarly but accessible analysis, geologist Wignall explores the perfect storm of cataclysms, plate tectonics and other forces that led to “The Great Dying” — and the rebound of life in its aftermath.

Adventures in Human Being: A Grand Tour From the Cranium to the Calcaneum

Scottish physician Francis racked up awards for his memoir Empire Antarctica, which chronicled his time as the doctor at a remote research station at the bottom of the world. He carries over that book’s sense of wonder and wit in this intelligent, intimate exploration of human anatomy that draws on history, philosophy and his own experiences in operating rooms and ERs. Francis covers the body from head to toe, literally, opening with a brain surgery assist and closing with ruminations on the humble footprint that’s the unique signature of our species.

Dark Matter and the Dinosaurs: The Astounding Interconnectedness of the Universe

It’s a tall order to cover everything from the Big Bang to today’s ongoing Sixth Extinction in a consistently engaging way for a general audience. Particle physicist Randall delivers, peppering serious science with anecdotes about Roombas and fortune cookie messages.

Our Robots, Ourselves: Robotics and the Myths of Autonomy

By David A. Mindell

Neither overly optimistic nor doomy, MIT professor Mindell offers a clear-eyed, reasoned overview of current and potential robotics achievements — and why the machines will always need us.

Failure: Why Science Is So Successful

The Columbia University professor who gave us the much-discussed Ignorance in 2012 returns with the logical sequel: If ignorance is what drives us to imagine solutions, failure is the fuel that takes us further as we zero in on understanding.

Newton’s Apple and Other Myths About Science

“It’s probably best to get the bad news out of the way first,” writes physicist Daniel P. Thurs. “The so-called scientific method is a myth.” His is one of 27 essays in this provocative collection that tackles some of science’s most enduring misconceptions and dubious assumptions.

By Raymond Coppinger and Mark Feinstein

Almost everything you think you know about dogs is wrong. Forget the loyal companion stereotype, or the idea you’ve got to show you’re the alpha of the pack. Ethologists Coppinger and Feinstein present this most familiar of animals in a new and objective light, analyzing their anatomy and behavior with science rather than sentimentality.

The Horse: The Epic History of Our Noble Companion

The evolution of horses, and our relationship with them, is arguably the most complex of any domesticated animal. Lifelong equestrian enthusiast Williams takes on the topic at full gallop, weaving scientific analysis with cultural and historical anecdotes in this lively, fascinating read.