What The Event Horizon Telescope Reveals About Galaxy M87 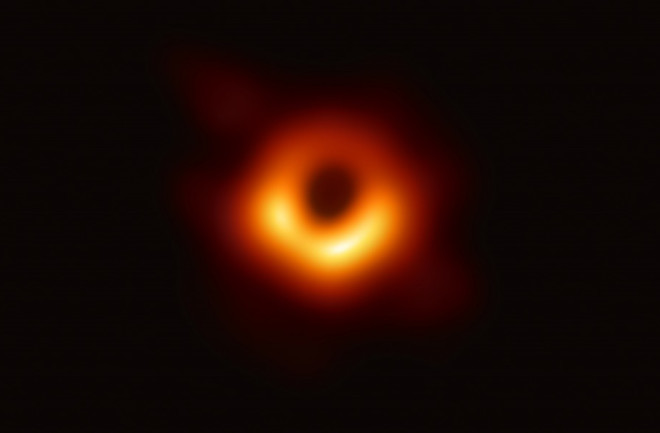 Here is the first direct image of a supermassive black hole. Captured by the Event Horizon Telescope, a network of eight radio telescopes spread across the world, the image shows the bright, spinning disk of material around the galaxy M87's supermassive black hole. Due the the intense gravity present near black holes, the appearance of the disk is warped. (Credit: EHT Collaboration) A massive international collaboration of researchers has released the first-ever direct image of the hellish environment surrounding a supermassive black hole. As part of the Event Horizon Telescope (EHT) project, the team used a global array of telescopes to probe the fiery disk of material swirling around the gargantuan black hole at the center of the galaxy M87. The results confirm that the hot gas swirling around a black hole is traveling at nearly the speed of light, creating a chaotic maelstrom around the black hole itself. And according to research published today in The Astrophysical Journal Letters, the structure of black hole is nearly circular, as predicted by Einstein's theory of general relativity, meaning the theory has passed yet another stringent test. "Overall," the paper states, "the observed image is consistent with expectations for the shadow of a spinning Kerr black hole as predicted by general relativity."

is a behemoth elliptical galaxy that sits some 53 million light-years from Earth. This giant holds trillions of stars and helps anchor the roughly 2,000 galaxies — including the Milky Way — that make up our local cosmic city, dubbed the Virgo Cluster

. In turn, the Virgo Cluster is a primary component of the much larger Virgo Supercluster. Without the striking spiral arms that decorate many of its neighbors, M87 comes off as something of a dull, spherical blob. But within it hides one of the most powerful galactic engines in the local universe. M87’s supermassive black hole packs the mass of several billion suns into a surprisingly tiny volume. And a seven-year study with the Hubble Space Telescope caught this invisible beast firing a powerful jet

of high-energy particles out at nearly the speed of light, shooting them roughly 5,000 light-years into space. Previous research on M87’s supermassive black hole indicates the galaxy’s mighty jets are produced when a dense disk of matter – called an accretion disk – whirls around the black hole at up to 2 million miles per hour

(3.5 million km/h). The material within the accretion disk grinds together as it circles, with the innermost regions spinning faster than those farther out. This differential rotation causes the magnetic fields to get coiled up, ejecting the material falling into the black hole at nearly the speed of light.

The Event Horizon Telescope: How Does it Work?

“We think the spin of the black hole interacting with the magnetic field is what causes the jets, but we don’t have proof,” Feryal Özel, University of Arizona astrophysicist and EHT team member, told Astronomy in an interview. “If we see jet-like images or anything associated with it, I think it increases our confidence that jets are formed very close to the black hole.”

M87's powerful jet streams from the galaxy's black hole like a cosmic searchlight, extending out some 5,000 light-years. The jet is believed to originate from tangled magnetic fields in the accretion disk of M87's supermassive black hole.NASA/The Hubble Heritage Team (STScI/AURA) Though many researchers have explored the inner workings of M87 before, in 2012, the then-new Event Horizon Telescope took its first peek. At the time, it had fewer radio observatories in its array, and it collected much less data, so it couldn’t produce an image yet. But it still managed to uncover evidence that M87’s supermassive black hole rotates

in the same direction as its accretion disk. They also calculated that the innermost edge of the black hole’s accretion disk spans only about the width of five solar systems. Keep in mind, M87’s black hole is between about 3 and 7 billion times the mass of the Sun, or about 1,000 times more massive than the Milky Way’s black hole, Sagittarius A*. That’s a lot of mass crammed into a relatively small space.

With this new EHT image of M87, we now have an unrivaled look at a black hole and its surrounding region, including its jet. And though the image is not quite 8K-quality, the black hole’s discernible shape and shadow go a long way in advancing our understanding of these reality-bending objects. Anything – be it matter or light – that falls past a black hole’s accretion disk and beyond the point-of-no-return, called the event horizon, is forever lost, so we can’t actually see the black hole itself. But we can see the shadow of the black hole silhouetted against the smoldering material spinning around it. “The image that we see includes the shadow not because it's opaque, but because it absorbs light from behind it,” Harvard University astronomer Avi Loeb, who was not involved in the EHT project, told Astronomy. “So it's a dark region surrounded by a sliver of light, like a moon crescent. One side is approaching; one is receding. So the approaching side is bright."

This first image will be studied and analyzed for years to come, but EHT is just getting started. Now that it’s possible to resolve the area around a black hole lurking in the core of a galaxy, we can expect to eventually capture images of other black holes beyond M87. But by directly imaging M87’s supermassive black hole and accretion disk, researchers are already gaining insight into the complex processes that shape the jets of active galaxies. And since powerful, jet-spewing supermassive black holes tend to be more prevalent in the early universe, these insights may just reveal new discoveries into how our young cosmos evolved. You can watch the National Science Foundation's stream of the Event Horizon Telescope announcement below. [embed]https://www.youtube.com/watch?v=lnJi0Jy692w[/embed]