A bogus viral photo is circulating on Reddit. Here's the real story. 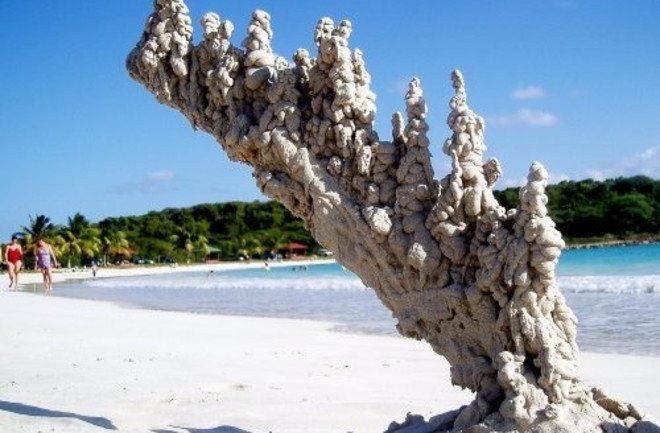 Before science, the flash of lighting that followed a crack of thunder was the will of Greek gods or a violent outcropping of animism. Now we know a bit more about lightning. We know that it can be hotter than the surface of our Sun; we know that it can absolutely strike in the same place twice; and we know that when it hits sand, it can create wonderful art. And we know people can mistake that art for a stick in the sand.

You may have seen the photo above making its rounds on the Internet. Spotted in multiple places on Reddit, the image was simply titled “What happens when lightning strikes sand.”

My B.S. detector went off. It looked too amazing to be true. It was impossibly stable and the spires on top looked curiously like the wet sand I used to make odd sand castles as a boy. So what is this thing?

Incredibly, lightning can and does in fact create something amazing when it hits sand, but the conditions have to be perfect. When it hits a sandy beach high in silica or quartz and the temperature goes beyond 1800 degrees Celsius, the lighting can fuse the sand into silica glass. The blast of a billion Joules radiates through the ground making fulgurite — hollow, glass-lined tubes with a sandy outside. Petrified lightning.

When the lightning perfectly strikes the sand, it branches through it like the root system of a tree to make this beautiful anomaly. But that simple fact is key to getting to the root of the viral photo: The lightning creates a tube of glass through the ground, not above it. You can actually see the impact hole when it occurs in rock.

How could so-called “petrified lightning” ever look like the photo found on Reddit? Though fulgurite is made below the ground, it does have a way to get above it: erosion. Because glass can resist much of what Mother Nature throws at it, a piece of petrified lightning could stay below ground for decades, centuries even. In time, the sand above eventually shifts to reveal the tubes, which still stand the tests of stinging sand and blowing wind.

Fulgurite is always a rare find, so specimens like the photo above (and these less believable ones) are awesome opportunities to glimpse nature’s raw power. They even have scientific value. Just a few months ago, chemists used gas trapped in fulgurite bubbles to determine the flora of ancient deserts. But even though the constant push of erosion can exposure these underground wonders, they are still fragile, requiring careful excavation to unearth a whole specimen without breaking it.

This brings us all the way back to the viral photo. It’s bogus. First, the photo supposedly shows a specimen of fulgurite that looks nothing like any of the other myriad, cataloged examples that you can easy find on Google. Second, when petrified lightning is exposed by erosion, it is in a relatively calm area (they are fragile after all). T

he viral photo is on the edge of a beach with foot traffic and a tide. It would never make it to that size without having a team of geologists quickly excavate it in front of tanning swimmers for the shot. Third, looking again at all the other examples of fulgurite specimens (that it looks nothing like), the object in the viral photo has obviously been tampered with. The spires on the top of it were put there afterwards.

Even if it were fulgurite underneath, the extra weight would surely topple or break it. That’s the best-case scenario: An amazing piece of petrified lightning with wet sand dripped on it by playful beachgoers. But the most likely scenario is that this isn’t what happens when lightning strikes sand at all. Nothing about the photo is consistent with the already understood phenomenon.

On Reddit, where the picture was first picked up, the first commenter nails it:

As someone who lives near the beach, this is a stick stuck in the sand [that] had wet drippy sand slowly dripped/poured on it.

Currently circling the internet is a piece of positioned driftwood with some sloppy sand castles on it. Nature provides us with truly amazing images. This is a sunset on Mars! This is what happens when a parasitic fungus replaces all the tissue of a tarantula! But nature’s ability to astound has us jumping at every weirdness no matter its scientific validity. Every time we get it wrong, it's a missed opportunity for education. When lightning strikes sand, it can create something beautiful, but not this viral photo. So be careful what you retweet.

UPDATE: The viral photo is now confirmed to have nothing to do with lightning. As fellow Scientific American blogger Glendon Mellow has uncovered, the original photo appears to come from an artist who specializes in making sandcastles. The viral photo is what happens when you make an interesting castle out of sand, not when lightning hits it.