What is the Evidence for Hurricanes in the Distant Past? 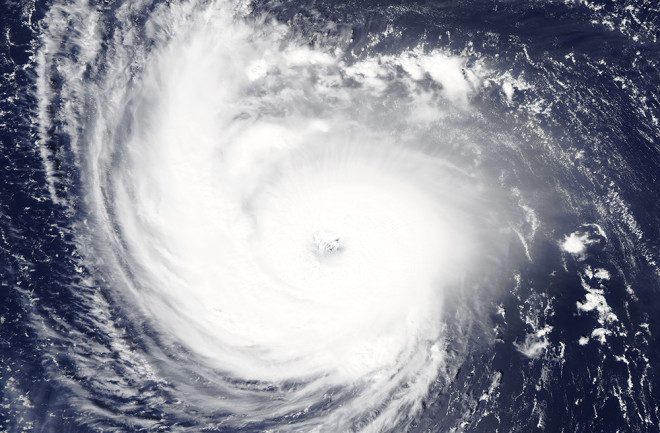 Aqua MODIS image of Hurricane Florence, seen on September 11, 2018. NASA. Hurricanes are massive meteorological events and, as we've seen recently in Puerto Rico, enormous humanitarian disasters. Yet, on a geologic timescale, massive storms like hurricanes and typhoons are ephemeral moments that are surprisingly difficult to read in the rock record, even if they seem like such powerful forces when they occur. Right now, Hurricane Florence is bearing down on the Carolinas and it makes me wonder, what evidence could we expect to find for the hurricane 100, 1,000 or 10,000 years in the future? One example of searching for past hurricane deposits (in this case typhoons, which are the same thing) is a study by Woodruff and others from 2014. They looked for evidence of the Kamikaze typhoons that may have prevented Kublai Khan's fleet from invading Japan in the mid-13th century. They examined a small coastal lake/lagoon in southwest Japan searching for evidence of marine flooding -- the signature of a major storm. The lake isn't far from the sea, but enough stands in the way that only during major storms should marine material get deposited in the lake. In particular, inorganic material along with Strontium from the beach (rather than river sediment that is normally deposited) is used as marker for these past storms. What they found is that, indeed, there are storm deposits in the right layers of sediment from the lake that match up with the "Kamikaze" typhoon legends that kept Khan's fleet away. Similarly, Naquin and others (2014) looked at lakes near the coast in Louisiana and found that in those lakes, increases water content of sediment, organic material and carbonate (from marine organisms) likely are evidence of seawater and debris getting into the lake during massive storms -- in this case, Hurricane Katrina (and Rita) in 2005 and Gustav (and Ike) in 2008.

Deposits formed by marine and beach material making its way inland (called "inundation") examined across the planet suggest that, at least over the last 3,000-5,000 years, there are global cycles of tropical cyclones (in other words, hurricanes and typhoons). Extending the chronology of major storms found in the rock record is one of the next frontiers of paleotempestology (the study of ancient storms). Sometimes evidence of a hurricane might be lurking in places you might not expect. The isotopic composition of coral depends on the water that the coral is growing in. By measuring the oxygen isotopic composition of the coral, big changes in water chemistry, like the input of fresh water in a massive hurricane, can be seen. And because you can date corals using other elements in the skeleton, you can map out potential cycles of hurricanes over time (depending on when the coral was growing). That's why understanding the "when" and "how big" of hurricanes in the geologic record is important. Tropical cyclone activity around the globe appears to wax and wane. In order to determine if there are patterns or correlations to when cyclone activity is high and low, we have to find and date the evidence of cyclones across the recent (and hopefully more distant geologic past - we're talking millions of years ago). Paleotempestology is challenging, but vital for unwrapping how climate -- and storm activity -- has varied across the Earth's history.

Garcia (2014) examined marshes in coastal North Carolina and found sharp increases in coarse material and marine organisms in layers of the marsh sediment and these deposits were part of sequences of 10-12 major storms recorded in the marshes dating back over 1,500 years. However, the sandy and skeletal-rich deposits seem to underestimate the number of storms in the historic record (past 200 years), so these 10-12 storms found in the sediment record likely were giant hurricanes.