What I'm Thankful For: The Science and Technology Edition 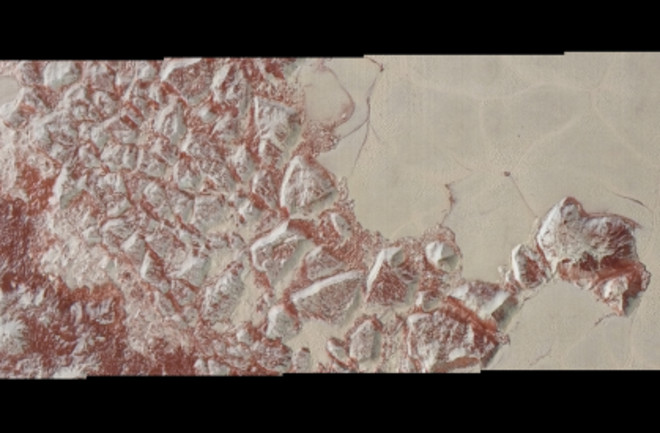 Ice mountains, nitrogen glaciers, and enigmatic flows on Pluto--just one small sample of the inspirational images returned by the New Horizons probe this past year. (Credit: NASA/Johns Hopkins University Applied Physics Laboratory/Southwest Research Institute) It can feel inappropriate celebrating the exploration of the universe while the media are saturated with grim stories about warfare, terrorism, and other forms of human suffering. The issue boils down to matters of sensitivity and propriety: How can you talk about something so theoretical and remote when there are so many problems all around us? I wrote a column on this theme last year, and it feels especially timely right now as I (like so many other Americans) am stepping back to think about the things I'm thankful for. What really struck me from that perspective was the sense of progress: The old-fashioned sense of forward motion through history, from less civilized to more, toward a better and more fulfilling lifestyle for all of humanity. It is easy to lose sight of the pattern while being barraged by news stories that give the impression we are living in the worst time ever--but by most measures, we are living in the best time ever. I'm not talking just about scientific exploration (in which 2015 witnessed historic explorations the small worlds Pluto and Ceres), but also about the overall quality of human life. Both are getting better and better, and the reasons why are intertwined. You may be skeptical, so let's look at some hard statistics. First, the overall state of conflict. Just to be clear, every death is loss, and every battle or attack is horrific. But the long-term trend is cause for optimism. The data here are compiled by Max Roser; follow this link for information about the sources.

You have probably heard a lot this past year about the "war on police." Again, I do not mean to make light of any individual incident (and note that I am not showing the flip-side statistics on the number of people killed by police officers, because no reliable statistics exist--a serious problem in itself). But also again, the trend is surprisingly positive. Look at the dramatic drop since the 1970s. Data via AEI, with more information here.

In one of the most important measures of human health and well-being--infant mortality--the trend lines are especially encouraging, with stubborn inequality but steady improvements all around the globe. Data via UN World Population Prospects.

There is no big secret about the reasons for these changes. Science and technology have improved health care and led to a rising standard of living in almost all parts of the world. Healthier, wealthier families can devote more resources to each child. And even though technology has had the capacity to make warfare more deadly, it has paradoxically tended (with some obvious big exceptions) to make the world less violent. Science has made human life better, and vastly expanded our knowledge of our place in the larger reality. I cannot document it in chart form, but I am quite certain that inspiring images of discovery have helped create a happier and more peaceful world. Gazing a an image of nitrogen glaciers flowing down ice mountains on Pluto sums up, in one picture, the grand potential of the human mind. It give us something we can all share: an understanding of the universe that belongs to everyone, that is an inexhaustible resource. Consider what our species is doing in space right now:

"What's Up in the Solar System," an infographic created by Olaf Frohn of The Planetary Society. There are many more grand adventures just ahead. NASA is hard at work on the James Webb Space Telescope (a successor to Hubble), and TESS (another space observatory specifically designed to find worlds around other stars). Upcoming missions will bring back pieces of asteroids, hunt signs of life on the ice moon Europa, and accelerate the search for gravitational waves. The reach of the human mind keeps advancing. And for that I am truly, deeply thankful.