What if the Moon Disappeared Tomorrow?

The moon holds Earth’s 23.5-degree tilt steady. Without the moon, Earth would wobble, dramatically affecting our planet’s seasons and climate. 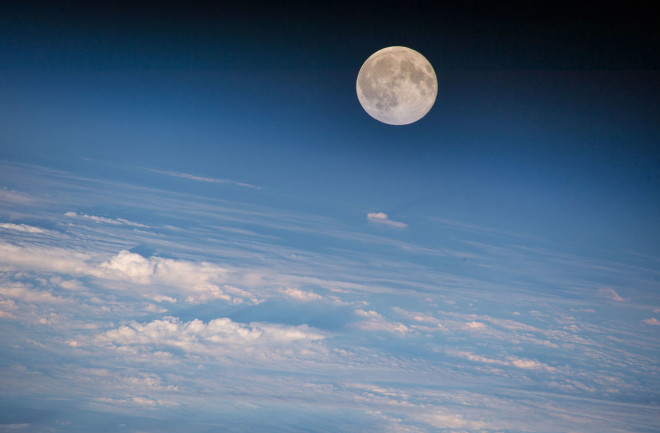 Astronauts on the International Space Station caught the full moon rising over the Atlantic Ocean in this August 2016 image. (Credit: NASA)

The closest object to our planet, the moon, may seem like Earth’s little sibling. Since its birth, the satellite has mostly just hung around, playing gravitational tug-of-war. But what would happen if the moon vanished tomorrow?

“Three billion years ago, when the moon was closer to Earth, a lot of things would have changed pretty dramatically,” says Matthew Siegler, lunar research scientist at the Planetary Science Institute in Dallas, Texas. “Right now, the moon is far enough away that most of the things it does for us are very long term, like stabilizing our orbit over hundreds of thousands of years.”

If we all woke up one morning to find the moon missing, most of us probably wouldn’t notice.

Those who live near the oceans would find the tides reduced, but not completely absent. While the moon does most of the gravitational tugging that creates our tides, the sun also plays a role. Coast-dwellers would notice tides less than half as big as they are now.

“You wouldn't entirely ruin surfing as a sport,” Siegler says. “[But] surfing would suck.”

While a moonless sky wouldn’t affect most of our day-to-day lives, it would upend the lifestyles of many nocturnal animals. Animals like moths have evolved over millions of years to navigate by the light of the moon and stars. Newly hatched turtles use the moon’s light to find their way to the ocean — and they’re struggling enough as it is, thanks to artificial streetlights that lure them in the wrong direction.

An errant moon would also affect Earth’s motion about its axis. The pull of the moon currently increases the length of a day by about two milliseconds every century. Though if that increase stopped tomorrow, it wouldn’t be very noticeable on our human timescales.

However, if the moon had disappeared billions of years ago, our rotation today would be very different.

Early on, the Earth had 4-hour rotations, which the moon slowly and persistently slowed to the 24-hour days we know now. Without the moon’s presence all those years, we’d still be spinning much faster — and feeling even more like there weren’t enough hours in a day.

The Reason for the Seasons

“Everything we know about the seasons would be completely out of whack,” says Paul Sutter, astrophysicist at the Flatiron Institute. At a certain angle, “Some places on the planet would hardly ever see the sun at all, and at others the sun would be overhead for months on end.”

The change in Earth’s tilt would happen gradually, though, so we wouldn’t notice it instantly or likely even within our lifetime. But for animals that have evolved over millions of years to live in sync with seasons, it might be hard for them to adapt, even over what would seem to us like a long timescale.

Everything Worth Knowing About the Moons of Our Solar System

Losing the moon would also mean losing a wealth of information about the young Earth. Thanks to tectonic activity, there are no truly old rocks on Earth. But the geologically inactive moon serves as a repository of information about what the Earth and the solar system were like billions of years ago.

For instance, the number of craters on the moon tells scientists that there was a period of heavy bombardment by asteroids some 4.1 to 3.8 billion years ago. Chemical analysis of moon rocks has also helped us learn how much of our planet’s water was brought to Earth by comets and asteroids.