What Flavor is Your Solar System?

Turns out there are a lot of objects in space that look deliciously like food. 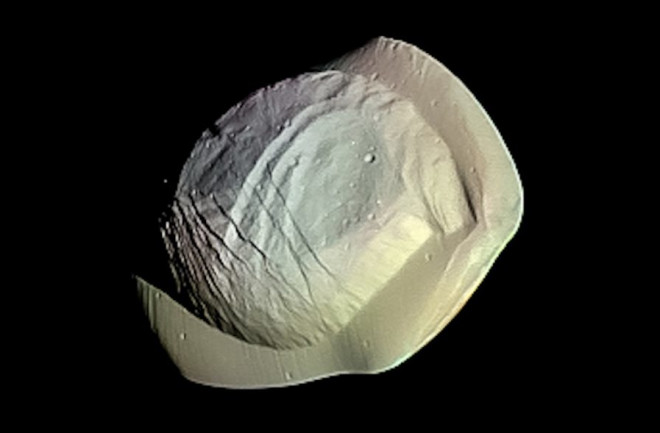 Pan may be the most food-like of all moons. This image taken by Cassini near the end of its mission in 2017. (Credit: NASA/JPL/SSI/Kevin M. Gill)

I spend a lot of time on science Twitter. It's a great source of breaking research news (as long as you curate your Twitter feed carefully), but also a fascinating peek into the human psyche.

People who love astronomy naturally connect it to the other things that they are passionate about: politics, family, cats, science fiction ... and food. Lots and lots of food. It's strange that there aren't any constellations dedicated to food, considering how readily the human mind makes the connection. (I suppose you could argue that most of the animal constellations are potentially food-related, especially Lepus, the hare being pursued by Orion, but that isn't quite the same thing.)

Post a picture of on of Saturn's moons, and pretty soon there are arguments breaking out over whether it looks like a pierogi, an empanada, or a ravioli. In that spirit, I started keeping a small file of foods that resemble solar-system objects, or vice versa.

Here's a selection of what I've come up with. I'd be curious to hear about your additions or alternatives. I'll skip the Sun (don't look straight at the Sun, folks) and start with the innermost planet, Mercury. Hard to argue that it isn't a giant dinner roll baking in the intense solar heat.

Poor Venus gets no respect. Just try to find a professional, high-resolution image of the planet taken in visible light. Nobody bothers to do it, because Venus is covered with unbroken clouds. Japan's Akatsuki got some beautiful images in ultraviolet, however. They show cloud patterns invisible to the human eye. They also make the planet look just a little less like marshmallow fluff.

It takes zero imagination to connect the Moon to a round of cheese. I suppose that would make the Earth a blue cheese?

This is one of your occasional reminders that Mars is not really the "red planet." Look at it in the sky and you can see for yourself that it's more of a rich orange, similar in color to a ... pumpkin scone.

Jupiter's food associations are a bit subtle, but there's plenty of cappucino or frosting inspiration in its clouds. Better yet are its moons. The large volcanic moon Io is frequently, and justly, compared to a pepperoni pizza. As for Europa, it looks so much like the bottom of a frying pan that the team working on NASA's upcoming Europa Clipper mission sent out this image, challenging people to figure out which is which. (I'll let you figure it out.)

Eight of these are the bottoms of frying pans. One is Jupiter's moon Europa. Can you tell which is which? (Credit: NASA/JPL)

Saturn has a bit of lemon merengue going on, to my eye, and it has some of the most flavorful moons in the solar system. Titan is covered in an orange haze that makes it look a lot like ... an orange, of course.

Titan vs an orange. (Credit: NASA/JPL/SSI)

The wild black-and-white moon Iapetus also has a crazy equatorial ridge resembling the seam of a walnut.

And then there is the little moon that inspired this whole silly post, Pan. That's the image at the top of this post. Pan's interaction with dust from Saturn's ring system left it shaped like a ravioli (raviolus?), pierogi, empanada — you decide where you come down on the debate. Uranus is just cake. It's cake, people. And don't you dare come at me with your bad homonym jokes.

Neptune? It's a blueberry. A cold, cloudy blueberry. Also, we should send a mission there; Neptune is a really interesting fruit of a planet.

Finally, there's Pluto. We finally got a good look at it when the New Horizons probe flew by in 2015. Scientists on the team started calling Pluto the "other red planet," which is no more true here than it is on Mars. I'm invoking the pumpkin clause again: Pluto looks like a pumpkin cheesecake. Rearrange the whipped cream and you can probably get a very nice match with the big heart-shaped feature.

OK, those are my selections. I've left off a lot of fun asteroids, comets, moons, and one notable dwarf planet. Wait until you are nice and hungry and let me know what you see.