What Did Neanderthals Evolve From?

Scientists search for the missing link between humans and Neanderthals. 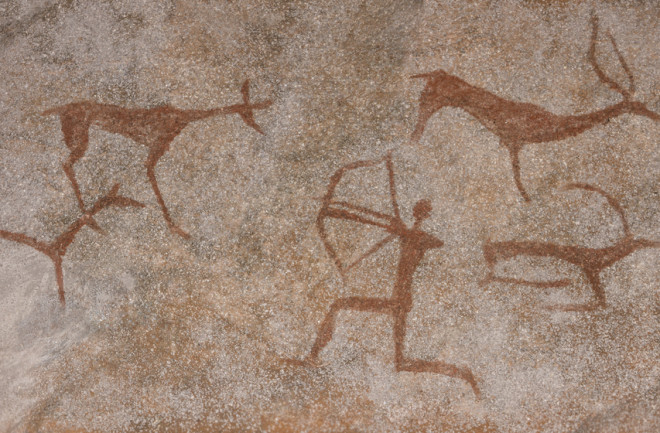 Experts suggest Neanderthals are our closest extinct relative. In many ways, we’re alike: We are both hunter gatherers who have mastered the use of stone tools and weapons. But experts also agree that we have our differences.

Those differences are seen in a split from a common ancestor more than half a million years ago. Still, the species that connects us has long eluded scientists.

Experts thought Homo heidelbergensis was the missing link — an early human species known to be the first to build shelters — but newer research has called this theory into question.

The age of H. heidelbergensis fossils revealed that some of the specimens were too young to be the common ancestor, says Chris Stringer, a paleoanthropologist at the London Natural History Museum. Rather, H. heidelbergensis was more likely a contemporary of modern humans and Neanderthals, not an ancestral link, says Stringer.

"Frankly, we no longer know where the ancestry of the Neanderthal lies," he says.

Experts think that a common ancestor goes back to around 600,000 years ago, far older than Kabwe 1, for example, a H. heidelbergensis skull found in Zambia in 1921.

In the study published last year, Stringer and his team used laser dating to uncover that the skull, which was formerly thought to be much older, was only around 300,000 years old. This was when both modern humans and Neanderthals already existed.

Laser dating technology helped experts to uncover who our common ancestor was not. But it will take similar, more advanced technology, to finally pinpoint the link.

We must look back even further into the fossil record to unlock the mystery and we’re not there yet, says Stringer. "When we have a better fossil record from around 500,000 to 800,000 years ago, we’ll be in a better position to know for sure."

The Human and Neanderthal Split

The warm climate in Africa, where the earliest H. sapiens lived, has impacted the preservation of DNA more than Neanderthal remains found further north in Europe and Asia, he says.

Researchers use DNA evidence when they can, but when it’s not available, they rely on anatomy to note the differences between Neanderthals and H. sapiens.

Humans have a high and rounded brain case, with a small brow, a chin on the lower jaw and a slimmer bone structure, says Stringer. Neanderthals, by comparison, have a longer, lower skull, with a larger nose, brow and no chin.

"Humans have a clearly distinct skeletal shape from Neanderthals," says Stringer. "These differences suggest that there was a separate evolution for hundreds of thousands of years."

On the other hand, older modern human remains have a bigger brow, bulkier teeth and more robust skeletons. And the closer in age the remains are to the mystery ancestor, the difference in features is less pronounced.

After the two species evolved from a common ancestor, they became unmistakably separate in both appearance and DNA. But at the same time, before Neanderthals went extinct 40,000 years ago, they did many of the same things as humans. They hunted the same large game, had burial rituals, used similar tools and even interbred.

"We can’t know whether it was coerced or not, but we do know they interbred," says Erella Hovers, a professor of prehistoric archaeology at the Hebrew University of Jerusalem.

No matter whether it was through love or war, says Hovers, we still hold the remnants of Neanderthals in our genes today. Depending on what part of the world you call home, you likely have around two percent Neanderthal DNA.