What Are Tholins? The Mysterious Substance That Turned Ultima Thule Red 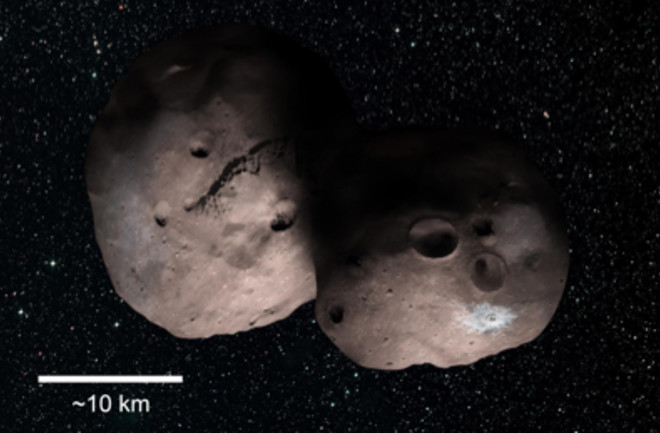 Ultima Thule is likely covered in a red glaze of tholins, as depicted in this artist's illustration. (Credit: NASA)

On New Year’s Day, NASA’s New Horizons probe streaked by a tiny world dubbed MU69, or Ultima Thule, the farthest object humankind has studied up close. With most of the data still on the spacecraft waiting to be transmitted, scientists are still getting to know this distant body. We know that it’s composed of two chunks of rock loosely stuck together. We know that it doesn’t have moons or rings that New Horizons might have careened into on its close pass. And we know Ultima Thule is red.

Carly Howett, a member of the New Horizons team, said that if you were standing on New Horizons as it sped past, Ultima Thule would appear red to the human eye and very dark. But with the aid of enhanced imagery, it’s also clear that some patches are redder than others, like the rim of the large crater known as Maryland.

That redness is likely caused by a mysterious class of compounds called tholins, the New Horizons team said Monday during a mission update at the 50th Lunar and Planetary Science Conference in Houston.

So what are tholins?

Broadly speaking, tholins are complex carbon chains made when ultraviolet light strikes carbon-rich molecules like methane or ethane. The result is a reddish, tarry substance. That may not sound exciting, but it was astronomer and science communication all-star Carl Sagan who named the material after creating it in his lab (along with fellow researcher Bishun Khare). They were performing variations on the famous Miller-Urey experiment, trying to recreate the chemical conditions on early Earth to see how life might have started.

The idea is that nature can, in the total absence of biology, produce more and more complicated carbon chains, until the leap to a biological protein, and presumably, life, is in fact just a single step. Tholins are complex, organic (meaning it contains carbon) molecules that could be a key step in this process. So scientists are very interested in where it’s occurring in the universe.

If you were on board the New Horizons spacecraft during its flyby of Arrokoth (once called Ultima Thule), the world would have looked visibly red to the human eye. That's likely caused by compounds called tholins. (Credit: NASA/Johns Hopkins University Applied Physics Laboratory/Southwest Research Institute)

NASA scientists say that if you were on board the New Horizons spacecraft during its New Year’s flyby of Ultima Thule, the world would look visibly red to the human eye. That’s likely caused by compounds called tholins. (Credit: NASA/Johns Hopkins University Applied Physics Laboratory/Southwest Research Institute)

In the Lab and in the Wild

Early Earth was likely a tholins-rich place. But in our current, oxygen-rich world, it exists only in labs (oxygen destroys tholins). Farther afield, researchers have found similar materials on Saturn’s moon Titan and Neptune’s moon Triton, as well as on lots of smaller icy bodies. But here is where the disagreement starts — it’s difficult to be sure how close the substances scientists create in labs are to the ones observed in space. They appear to be similar, but since we haven’t yet been able to bring back a sample from the outer solar system, appearances are all we have at the moment.

A reddish tint in certain environments is a pretty good hint that scientists might be looking at compounds that are at least similar to tholins, but there is far more than just one kind of potential tholin out there. Many different compounds can create various types of tholins, and picking out which might be present based just on their spectra, or the type of light they reflect, is nigh impossible. Mixed together and seen from afar, it’s not so easy to figure out one complex carbon chain from another.

Some researchers, such as planetary scientist Sarah Hörst of Johns Hopkins University, don’t like calling the outer-space versions tholins at all, since it’s hard to be sure what we’re looking at from so far away truly matches the substances created here on Earth. They are analogs, to be sure — but perhaps not the exact same thing.

Space Missions on the Tholin Hunt

But that’s all the more reason to study them as up-close as we can. The last decade has been filled with missions getting better looks at these far-off maybe-tholins. When the Cassini mission dropped the Huygens probe onto Titan, it revealed an entire world full of carbon-rich materials: on the ground, in the moon’s seas and lakes, and scattered throughout the atmosphere.

In 2015, the New Horizons probe flew by Pluto, painting a breathtakingly detailed view of the former planet — which was distinctly red in places, as is its sidekick moon Charon. Tholins (or something tholins-like) are the most likely culprit.

And now, as the new year dawned, New Horizons got an in-person glimpse at out an even more distant object, Ultima Thule, which is “very red,” according to New Horizons scientist Carly Howett. This puts it on par with other objects near it in the Kuiper Belt. “It’s a lot more red than things like comets,” Howett added.

Comets, in contrast to other Kuiper Belt objects, occasionally plunge into the inner solar system where they heat up and undergo chemical changes that never occur in the cold Kuiper Belt. This means that looking at Ultima Thule is a clean picture of primordial material from early in the solar system’s history.

The beautiful thing about tholins is that while they’re precious as a clue to our history as living organisms, they’re also pretty common. Carbon compounds like methane exist all over in the universe. Stars emit ultraviolet radiation every second, bathing the cosmos in it. The ingredients are easy to find. So if tholins are key to sparking life, we can look around and feel reassured that the makings for them are everywhere we look.