What Are the Chances That Earth Will Collide With Mars, Mercury, or Venus? 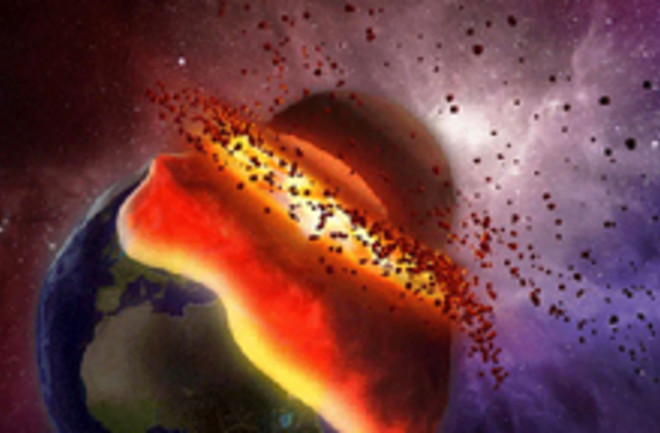 Is planetary Armageddon just a matter of time? Will Earth meet its fiery doom when the orbits of the planets in our solar system become destabilized, leading Mars, Mercury, or Venus to crash into our home turf? A new study predicts that there is indeed a very slim possibility that such a cataclysm will rock our world, but notes that the possible collisions wouldn't happen for more than 3 billion years, by which time humans may be long gone.

"I see the results as a case of the glass being 99 percent full and 1 percent empty.... While it's possible that a collision could occur billions of years from now, it's actually very unlikely" [SPACE.com]

, says Gregory Laughlin, an astronomer who wasn't involved in the current research.

Astronomers had thought that the orbits of the planets were predictable. But 20 years ago, researchers showed that there were slight fluctuations in their paths. Now, the team has shown how in a small proportion of cases these fluctuations can grow until after several million years, the orbits of the inner planets begin to overlap [BBC News].

The researchers simulated the interactions of the eight major planets, Pluto, and the moon over the course of 5 billion years, up until our sun is expected to expand into a red giant. The simulation, described in the study published in Nature, covered more than 2,500 possible futures. Study coauthor Jacques Laskar explains that for

the first few million years, planetary orbits hardly differed from one run to the next. Eventually, though, variations began to accumulate. Most of the detrimental changes resulted from Jupiter’s gravitational tug on Mercury, the inner planet with the most lopsided orbit, Laskar says. In one simulation, Mercury collides with Venus about 1.76 billion years from now.... In three other simulations, Mercury’s orbit becomes so lopsided that it falls into the sun [Science News].

Most of Mercury's maneuvers wouldn't have much effect on Earth, the researchers say. But in one scenario, Mercury's destabilized orbit pulls Mars into a lopsided orbit that brings it within 500 miles of the Earth in about 3.3 billion years, causing the Red Planet to break apart and shower Earth with debris. Using the idea of an

Earth-Mars close encounter as a starting point, [the researchers] then ran another 201 simulations to assess the possibility that the near miss could lead to a direct collision. In 196 of those computer runs, one planet in the inner solar system either slammed into another or fell into the sun. Of those scenarios, Earth was struck 48 times: once by Mercury, 18 times by Venus and 29 times by Mars [Science News].

Related Content: 80beats: Spacecraft Will Search for Evidence of a Hypothetical Lost Planet 80beats: Planetary Pinball Accounts for Asteroid Belts and Gaps 80beats: Did an Asteroid Strike Billions of Years Ago Flip the Moon Around? DISCOVER: Death by Cosmic Pinball tries to find the source of the dino-killing asteroid DISCOVER: Geophysics: Is the Earth’s inner core simply the other half of our only satellite? DISCOVER: Where Did the Moon Come From?Image: J. Vidal-Madjar, IMCEE-CNRS