Astronaut Ron Garan, currently on board the International Space Station, was taking pictures of our home world out the window -- and how cool is it to be able to say that? -- when he took this amazing picture of a meteor burning up in our atmosphere: 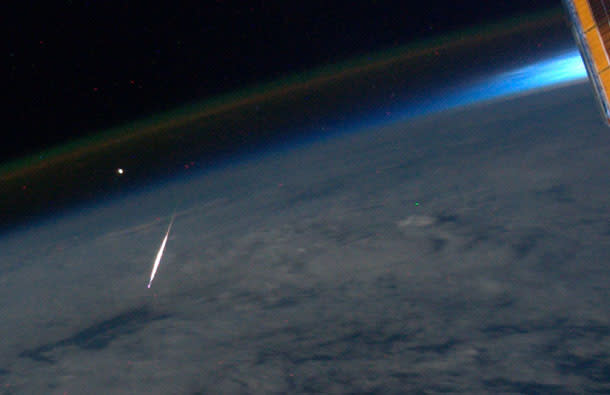 Wow! [Click to bolidenate.] How cool would it be to look down to see a falling star? He took this shot (according to the header info in the picture) on August 13 at 7:17 p.m. UT, when the ISS was above the Mongolia/China border. This was during the annual Perseid meteor shower, but that doesn't guarantee this meteor Ron saw was a Perseid. It probably was, though. For an observer on Earth, the Perseids rain down at a rate of about 60 per hour or so. You can usually see about 5 meteors per hour that are just random bits of cosmic detritus. So only 1 meteor in 12 is not a real Perseid, making it likely this one was. But that got me thinking... [WARNING: math ahead. Cool, tasty, refreshing math that will lead to insight, wonder, potential party conversation (assuming you go to the same dorky parties I do), and other nifty things.] 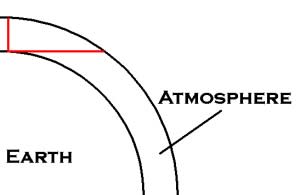 Meteors burn up roughly 100 kilometers (60 miles) above the Earth's surface. To make the math simpler, let's say they burn up at exactly that height, so that any meteor coming in hits this barrier and evaporates. You can picture it as a thin shell of air surrounding the Earth 100 km high, like a force field, or better yet as an umbrella that rain hits (it's a meteor shower, after all, ha!) and stops cold. When you look straight up, that barrier is 100 km directly above your head. When you look to the horizon, that distance is actually a little over 1000 km away, because the atmosphere follows the curve of the Earth (you can get an idea of this in the diagram above). The top of this umbrella is then 100 km up and over 1000 km to the sides. From the space station, though, looking down from orbit at a height of roughly 350 km, more of the atmosphere can be seen because the station is higher up (just like you can see farther if you go to the top of a building). The additional amount seen is very roughly twice the area of the "meteor umbrella" seen from the ground. So, from the ISS, you'd see roughly twice as many meteors in a given time as you would from the ground (mind you, I'm not trying to be terribly accurate here; I'm just getting rough numbers to estimate some things. Anyone willing to do the formal math is welcome to -- leave a comment if you do!). That means, if you're an astronaut on the ISS during the Perseids, you'd see about 120 or so meteors per hour, assuming you have a clear view all around you -- in reality, a lot of your view is blocked by the ISS itself. But still, from up there the view is better. The thing is, you'll also see more random meteors as well, so the ratio of 12 Perseids to 1 random one should be about the same! So no matter how you slice it, the meteor in the photo above is probably an actual bona fide Perseid. As you can see by the picture, this meteor was very close to the horizon as seen by the ISS. That means it was pretty far away, 1500 km (900 miles) or more. That's a long way, especially when you find out a typical Perseid is smaller than a grain of sand! It's their tremendous speed of 40 - 60 km/sec that gives them such high energies, burning up brightly in our air. 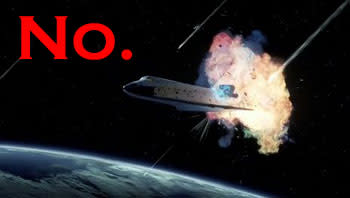 Still... that made me wonder how likely it is for the ISS to get hit by a meteor, and I realized the answer is: very small. Think again about that umbrella above your head where meteors burn up. It has a surface area of about 4,000,000 square kilometers. Yet only 60 meteors per hour are seen in that vast region! Statistically speaking, that means that every hour, a single square kilometer of that umbrella should expect to get 0.000015 meteors. That's only one meteor every 8 years or so! The space station is much smaller than a square kilometer, too, so the odds of it getting hit by a Perseid are something like one one-thousandth even of that small number. That in turn means that -- again, just statistically and very roughly speaking -- the space station should get hit by a Perseid once every 8000 years. Even given the number of meteor showers every year, the odds of it getting hit are pretty small. There has been a satellite lost to a Perseid meteor impact, though, back in 1993, so it's not unheard of. But the ISS is armored against smaller impacts like the one that took out that satellite, so danger to the astronauts is significantly reduced. But then, that's just what I'd expect! After all, the station has been orbiting the Earth for many years so far, and has not been hit by anything meteor-sized yet. It's more in danger from man-made orbital debris than anything flung at it from deep space; in fact, it's actually been moved to avoid bigger debris in the past. So this works out well: meteors aren't a statistical big risk for the astronauts, and we get to see incredible shots like this one as well. I'm glad the math works out in our favor!

Image credit: NASA. The picture of the Shuttle getting hit by meteors is from the movie "Armageddon", if you're curious. I drew the fabulous curving Earth and air diagram myself with my unparalleled Photoshop skills. Tip o' the Whipple Shield to Universe Today, which has a fantastic gallery of Perseid pictures.

Related posts: - How far away is the horizon? - Southern lights greet ISS and Atlantis - Followup: city lights from space - Clearing the air, or mea culpa, Part 1