There will be a partial lunar eclipse on Saturday, June 26, for folks in the central and western part of the United States. It's in the morning, so you'll have to get up early to see it. Here's what it'll look like, more or less, from the Mountain Time Zone (so mid-eclipse is at 06:38 central time or 04:38 Pacific): 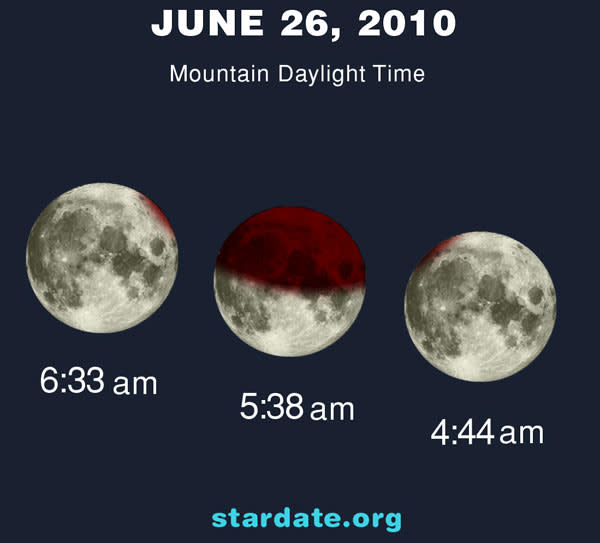 The folks at Stardate.org have more info. A lunar eclipse is when the Moon passes into the shadow cast by the Earth. It can be seen by anyone as long as the Moon is up and visible when it's in the shadow. In this case, the farther west you are the better; the Moon will set before the action really gets going for people on the east coast, and sets mid-eclipse for Central and Mountain timers. If you're in Hawaii, you can see the whole thing. Lunar eclipses are pretty, and they last for a long time, so you can get a decent chance of seeing it. They're also pretty easy to photograph, so if you get some images online link to 'em in the comments and let us ooooh and ahhh over them!