Watch tiny, dark Mercury glide across the luminous face of the Sun in glorious timelapse detail 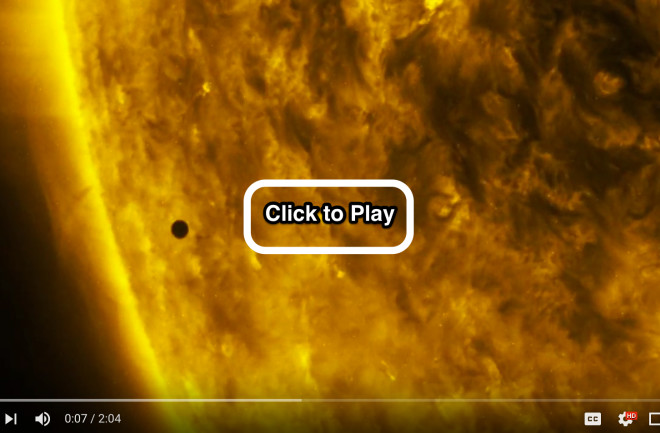 A timelapse video consisting of images from NASA’s Solar Dynamics Observatory spacecraft shows Mercury passing directly between the Sun and Earth on May 9, 2016, between 7:12 a.m. and 2:42 p.m. EDT. (Source: NASA Goddard Space Flight Center/Genna Duberstein Music: Encompass by Mark Petrie) Yesterday's transit of Mercury between the Sun and Earth was captured by countless amateur and professional astrophotographers alike, including Discover's photo editor, Ernie Mastroianni. Make sure to check out his post about it, which includes a spectacular image of the transit, here. Now, the folks at NASA's Goddard Space Flight Center have used images acquired by the Solar Dynamics Observatory spacecraft to create a series of timelapse animations stitched together in one video showing the rare event in beautiful, closeup detail. Click on the screenshot above to watch the spectacle. The video shows 14 separate views of tiny Mercury, in shadow, drifting in front of the gargantuan, luminous Sun. SDO's imagery shows the scene in different wavelengths of light, which highlight varying features on the Sun's surface. For Dean Pesnell, the transit was an opportunity to focus not just on Mercury but what was happening on the Sun during the transit. "One of the cool things about the transit was Mercury guiding your eye to see all the stuff that was going on around it on the Sun," he says.

Coronal loops in the Sun's atmosphere, viewed in ultraviolet light. (Source: TRACE/NASA) One example: Just as Mercury enters the scene from the left, you can see it passing over a bright set of coronal loops — glowing arch-like structures of plasma appearing above the Sun's surface. (Click on the thumbnail at right for a closeup view of coronal loops, captured by the now-retired TRACE satellite.) Pesnell's favorite moment occurred when Mercury passed over the Sun's limb (meaning its apparent edge) as the planet was exiting the scene. "It went over a jiggling prominence," he says. Make sure towatch for it toward the end of the video. Solar prominences are large, bright features reaching out from the Sun's surface. My favorite feature is what appears to be a small solar flare, visible as a sudden, almost explosive brightening just above Mercury, roughly midway through the transit. It's visible in several different wavelengths of light. "I don't know for sure whether it was a flare, but quite possibly it was," Pesnell says. His conclusion: "I thought it was a nice little transit. It got me to look at different things on the Sun. And I was happy that Mercury more or less followed the path that Keplerian physics said it should follow. All in all, I'd say it was a success."