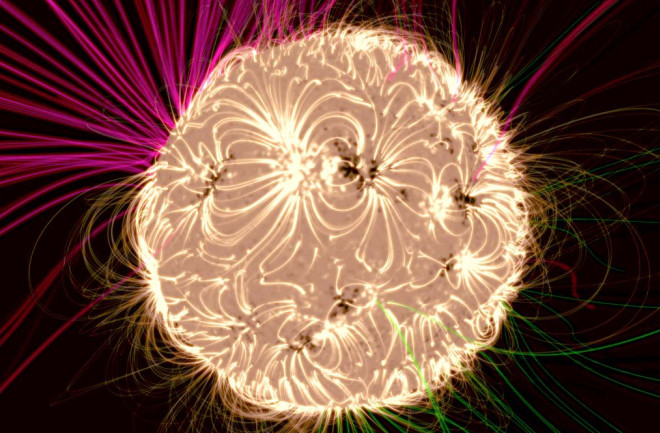 (Credit: NASA's Goddard Space Flight Center) Up close, the sun is a roiling mass of plasma with a surface that's whipped into a frenzy by its self-generated magnetic fields. While invisible to us, the magnetic forces produced by the sun are responsible for massive bursts of superheated material, called solar flares, that our neighboring star periodically jettisons. Such flares are responsible for the spectacular auroras that paint the sky here on Earth. And while auroras are beautiful spectacles to behold, the solar flares that produce them could potentially knock out electrical systems across the globe if they're powerful enough. Therefore, understanding the sun's magnetic structure is crucial for scientists to forecast and understand these events.

In order to view the invisible, scientists build models that combine observations of the sun's swirling plasma with our understanding of magnetism and the ways solar material moves in space. To precisely study the sun's magnetic loops, researchers use a magnetograph, which measures the strength and direction of magnetic fields. The video below, which was produced by NASA's Goddard Space Flight Center, is one such model, and it shows changes to the sun's magnetic field over the past four years.

The purple and green lines in the video, as NASA's Holly Gilbert explains, represent open magnetic field lines that extend outward from the sun deep into space. The white lines, on the other hand, are closed magnetic field lines that emerge from the sun's surface, loop around and close near the surface. Tight clusters of closed magnetic loops on the sun's surface are telltale signs of significant solar activity.